The Summer League is a period of intense preparation for teams and players; and a period of high anticipation for fans, providing an inside look and access to future NBA stars in a highly competitive basketball environment.

For NBA Players and prospects, there is no off-season, they are constantly focused on developing their game and preparing for the upcoming season. Teams and coaching staffs are likewise focused on evaluating talent and identifying ways to improve their chances of competing for an NBA Championship.

Each team will play five games over the seven-day event, with a championship day being played on the final day of the league. A point system will establish the standings leading up to the final day, with eight points awarded each game based on: four points for winning the game and one point for winning a quarter (in the event of a tied quarter, each team will receive 0.5 points). In the event of ties in seeding heading into championship day, three tiebreakers will be in place: 1) total point differential; 2) total points allowed; 3) coin flip.

Due to space limitations, the event is not open to the public and will be open only to the media and professional team/league personnel. Fans can access box scores, game recaps and cumulative statistics by visiting www.orlandomagic.com.

NBA TV will televise the Southwest Airlines Orlando Pro Summer League games, with a complete schedule of games and broadcast information to be released at a later date. Additionally, fans will once again be able to watch every game live on NBA.com and on the NBA Game Time app.

A complete game schedule for the Southwest Airlines Orlando Pro Summer League is listed below. The Magic’s roster will be released at a later date. 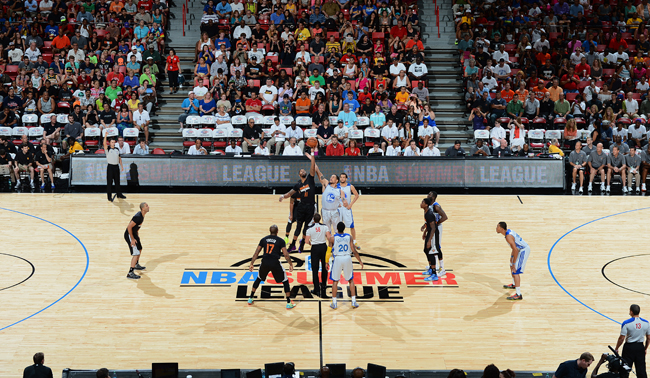 NEW YORK — Samsung NBA Summer League tips off on Friday, July 11, at the COX Pavilion and Thomas and Mack Center on the campus of the University of Nevada Las Vegas, marking the 10th time the event will be held in the desert. For the second time in the event’s history, a tournament-style format will be utilized to crown a champion.

This summer’s event will again feature a single elimination tournament schedule that will crown the Samsung NBA Summer League Champion on Monday, July 21. Teams will compete in three preliminary round games from July 11-15 before being seeded in a tournament running through the Championship Game on July 21. Each team is guaranteed to play at least five games.

The Golden State Warriors won the inaugural NBA Summer League Championship in 2013, defeating the Phoenix Suns 91-77 in the title game. Golden State’s Ian Clark was named the Most Valuable Player of the championship game following a 33-point outing. Clark, who was not drafted by an NBA team in 2013, went on to sign with the Utah Jazz, and spent the entire 2013-14 season on the team’s roster. Jonas Valanciunas of the Toronto Raptors was named the Most Valuable Player of NBA Summer League 2013. The 6-11 center played in four games, averaging 18.8 points and 10.0 rebounds, and has gone on to anchor the Raptors’ frontcourt this season, helping the team make the playoffs for the first time since 2008. He was joined by Kent Bazemore (Golden State), John Henson (Milwaukee), Jeff Taylor (Charlotte) and Cody Zeller (Charlotte) as members of the All-NBA Summer League 2013 Team. The team, which consists of two frontcourt players and three backcourt players, was selected by journalists covering the event in Las Vegas.

Since its inception in 2004, when the event featured six NBA teams (Boston Celtics, Cleveland Cavaliers, Denver Nuggets, Orlando Magic, Phoenix Suns and Washington Wizards) playing a 13-game slate, the league has grown exponentially in all areas. Last summer, new all-time marks were set in multiple areas, including: attendance (62,000-plus over 11 days); games played (61) and number of live NBA TV broadcasts (38).