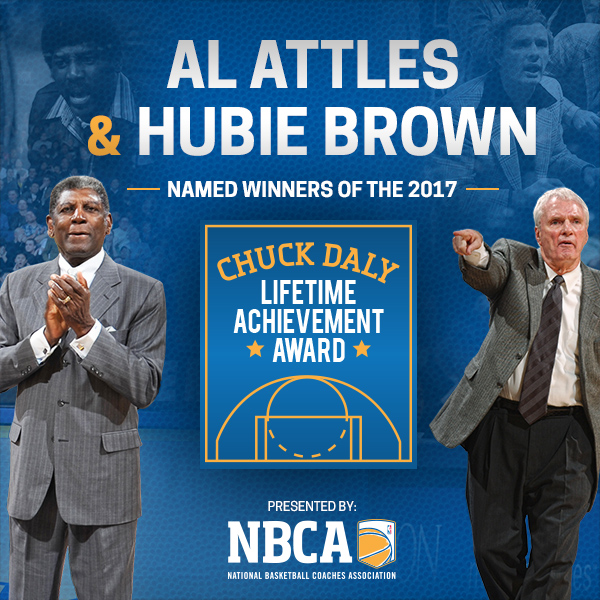 “Coach Attles and Coach Brown have made gigantic and wide-ranging contributions to the NBA game and coaching profession over the last several decades. Their recognition as co-recipients of the Chuck Daly Lifetime Achievement Award is well-deserved,” said Dallas Mavericks Head Coach and National Basketball Coaches Association President Rick Carlisle.

“I have been fortunate to enjoy a nice journey in the NBA and I appreciate everything that has happened to me along the way,” said Coach Al Attles. “Being named the co-recipient of the 2017 Chuck Daly Lifetime Achievement Award is a terrific honor and I appreciate the recognition from the National Basketball Coaches Association and the selection committee.”

Al Attles is synonymous with the Golden State Warriors. He was a fifth-round draft choice (39th player selected) of the then Philadelphia Warriors in 1960 and has been with the franchise ever since—as a player, coach and executive—building a unique relationship based on commitment, loyalty and dedication.

Attles was named Head Coach of the Warriors late in the 1969-70 season while still a player, and was player/coach for the last 30 games and all of the 1970-71 season. After that season Attles retired from playing to devote his energy to coaching full-time.

As Head Coach, Attles led the Warriors to their first NBA Championship in the team’s West Coast history in 1975 over the heavily favored Washington Bullets. Attles became the second African-American Head Coach in NBA history to win an NBA Championship. In 13-plus seasons as Head Coach, Attles had a 588-548 overall record and guided the Warriors to six playoff appearances, including two Western Conference Finals. He remains the winningest and longest serving Head Coach in Warriors history.

In 2014, Attles was honored by the Naismith Memorial Basketball Hall of Fame with the John Bunn Lifetime Achievement Award. The award, which is the most prestigious award presented by the Hall of Fame outside of enshrinement, honors coaches, players and contributors whose outstanding accomplishments have impacted the game of basketball. He was inducted into the Bay Area Sports Hall of Fame in 1993. Attles is one of only six players to have had his jersey number retired by the Warriors. And in 2015, his alma mater, North Carolina A & T State University, retired his college jersey number, making him the first player honored in such a fashion.

“I am tremendously honored to be the co-recipient of the 2017 Chuck Daly Lifetime Achievement Award because of the significance and status of the award,” said Coach Hubie Brown. “This is also a tremendous honor because of my relationship with Chuck Daly in the coaching fraternity as assistant coaches at Duke University and then into the ranks of professional basketball. This award is a major highlight in my coaching career.”

Over the past 60 years, Hubie Brown has developed a comprehensive basketball resume while teaching some of the sport’s most legendary figures. Brown is known for fostering young talent, transforming struggling franchises into playoff caliber squads and teaching those around him.

Brown has coached at all levels of the game. He began his coaching career in 1955 at St. Mary’s High School in Little Falls, New York. He spent nine years at the high school level before becoming an assistant coach for one year at the College of William and Mary in 1968. In 1969 he joined Duke University as an assistant coach for three seasons. Ironically, he and Chuck Daly served together at Duke as assistant coaches under Vic Bubas.

In 1972 Brown joined the NBA as an assistant coach for the Milwaukee Bucks under Larry Costello, where he worked with future Hall of Famers Kareem Abdul-Jabbar and Oscar Robertson.

After two seasons with the Bucks, Brown was given his first professional head coaching opportunity with the Kentucky Colonels of the American Basketball Association. Brown led the Colonels to the franchise’s first and only ABA Championship in 1975. When the ABA folded after the 1976 season, Brown returned to the NBA as Head Coach of the Atlanta Hawks where he won the first of his two NBA Coach of the Year honors in 1978. His second Coach of the Year award came 26 years later as Head Coach of the 50-win Memphis Grizzlies in 2004. Coach Brown has a combined ABA/NBA record of 528-589.

A man of many and varied talents, Coach Brown has worked for several national networks as lead analyst and has conducted basketball and coaching clinics around the globe.

The National Basketball Coaches Association’s Chuck Daly Lifetime Achievement Award honors the memory of Hall of Famer Chuck Daly, who over an outstanding NBA coaching career set a standard for integrity, competitive excellence and tireless promotion of NBA basketball. This year’s award recognizes the extraordinary contributions Al Attles and Hubie Brown have made to the sport throughout their NBA careers. Through building bodies of work that have had a positive and powerful impact on the NBA coaching profession. Attles and Brown have embodied the high standards and leadership philosophies that Coach Daly brought to the game.