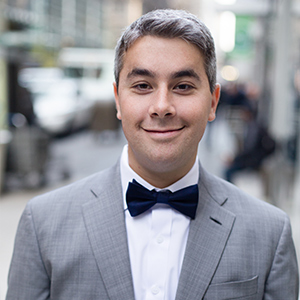 David S. Fogel is a graduate of Emory University and Benjamin N. Cardozo School of Law. David has been the Executive Director of the NBA Coaches Association (NBCA) since 2017. Prior to this, David served as the NBCA’s Associate General Counsel. David currently serves as a member of the Board of Trustees for the Naismith Memorial Basketball Hall of Fame. He also previously served as an Adjunct Professor at Pace University School of Law, where he taught a course titled “Legal Aspects of Professional Sports.” He has also been a guest lecturer at Benjamin N. Cardozo School of Law and New York University School of Professional Studies, where he has taught several courses on labor relations, the duty of fair representation, alternative dispute resolution, and collective bargaining in sports. David also serves as Co-Chair of the Sports Law Committee for the New York State Bar Association’s Entertainment, Arts, and Sports Law Section.

As Executive Director of the NBA Coaches Association his mission is to ensure that NBA Coaches have a voice within the on-court and off-court business of the League.  David is committed to honoring the past and protecting the future of the NBCA. 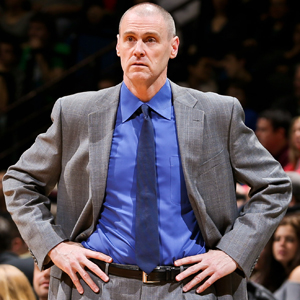 Rick Carlisle is beginning his 15th year as President of the National Basketball Coaches Association. Carlisle began his playing career in the NBA after the Boston Celtics selected him in the 1984 draft. Carlisle began his coaching career in 1989 as an Assistant Coach with the then New Jersey Nets. In five seasons with the Nets, he had the opportunity to work under Hall of Fame coaching legends Bill Fitch and Chuck Daly. Carlisle then moved on to Portland, where he spent three seasons as an Assistant Coach for the Trail Blazers under P.J. Carlesimo before joining former teammate Larry Bird’s staff as an Assistant Coach for the Indiana Pacers during the summer of 1997. Carlisle then got his first Head Coaching job in the NBA with the Detroit Pistons in 2001, where he went on to win Coach of the Year in 2002. In 2003, Carlisle was hired as the Head Coach of the Indiana Pacers, where he spent four seasons leading the franchise. In 2008, Carlisle was hired as Head Coach of the Dallas Mavericks. The Mavericks went on to win the NBA Championship in 2011 during Carlisle’s third year. Carlisle became only the 11th individual to have won an NBA Championship as both a player (Boston Celtics – 1986) and a Head Coach (Dallas Mavericks – 2011). In November of 2015, Carlisle passed Don Nelson to become the winningest Coach in Dallas Mavericks history and in January of 2021, Carlisle recorded his 800th win against the Charlotte Hornets, becoming the 15th Coach in NBA history to reach this milestone. He now joins San Antonio Spurs’ Gregg Popovich and Los Angeles Clippers’ Doc Rivers as the only active Coaches to reach 800 wins.

Rick, and his wife, Donna, have a daughter, Abby. 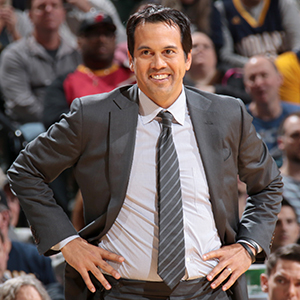 Erik Spoelstra is the Vice President of the National Basketball Coaches Association. Spoelstra played college basketball for four seasons at the University of Portland where he was recognized as the West Coast Conference Freshman Player of the Year in 1989. After graduating, he spent two years as a player/coach for TuS Herten, a professional basketball team in Germany. In 1995, Spoelstra was hired as the Miami HEAT’s Video Coordinator. After two seasons as Video Coordinator, he served two seasons as an Assistant Coach/Video Coordinator. In 1999, Spoelstra was promoted to Assistant Coach/Advance Scout, and later become the HEAT’s Assistant Coach/Director of Scouting in 2001 where he would gain great respect from players for his teaching abilities. Spoelstra spent two seasons working under Head Coach Stan Van Gundy from 2003-05 and then two seasons under Head Coach Pat Riley from 2005-08, where he was a part of Miami’s first NBA Championship in 2006. Over that span, he served as Head Coach of the Miami HEAT’s Summer League team from 2005-07. In 2008, Spoelstra made his Head Coaching debut, becoming the first ever Asian American Head Coach in the history of the four major North American sports leagues. In his first season he led the HEAT to its greatest single-season improvement, taking a 15-win team the season before to a 43-win season and a playoff berth, the best improvement by a rookie head coach in NBA history. Spoelstra later made four consecutive NBA Finals appearances from 2010-14, coaching the team to back-to-back Championships in 2012 and 2013. In December of 2017, Spoelstra became the winningest Coach in Miami HEAT history and in December 2018, Spoelstra recorded his 500th win, becoming just the 13th coach in NBA history to reach this milestone with a single team.

Erik, and his wife Nikki, have two sons, Santiago Ray and Dante.

Nate McMillan is the Vice President/Treasurer of the National Basketball Coaches Association. McMillan began his career in the NBA after the Seattle SuperSonics drafted him with the 30th overall pick in the 1986 draft, where he spent his entire 12 year playing career. After retiring from playing in 1998, McMillan stayed with the Seattle franchise, earning a place as an Assistant Coach under Paul Westphal. He held this role until 2000, when he was named Interim Head Coach of the SuperSonics. After officially being named Head Coach in 2001, he coached the Seattle SuperSonics until 2005. After 19 years with the organization, McMillan left Seattle to become Head Coach of the Portland Trail Blazers, holding that role from 2005 to 2012. During that time, McMillan had also been an Assistant Coach under Mike Krzyzewski for the U.S. National Team in the 2006 FIBA World Championship and in the 2008 Beijing Olympics, winning bronze and gold medals, respectively. McMillan again served as an Assistant Coach under Mike Krzyzewski for the U.S. National Team during the 2012 London Summer Olympics. In 2013, McMillan was hired as an Assistant Coach for the Indiana Pacers under Head Coach Frank Vogel. After the end of the 2015-16 season, the Pacers promoted McMillan to Head Coach, and he has led the Pacers to the playoffs every year for his first 3 years as Head Coach. In January 2019, McMillan earned his 600th career win against the Toronto Raptors, becoming the 26th Coach in NBA history to reach this milestone.

Nate and his wife, Michelle have a son, Jamelle, and a daughter, Brittany Michelle. 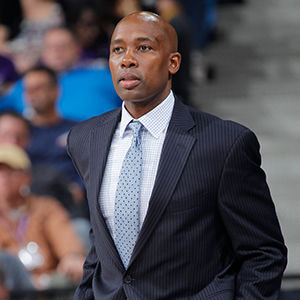 Jacque Vaughn is the Vice President/Secretary of the National Basketball Coaches Association. Vaughn played college basketball for four seasons at Kansas University where he was recognized as a two-time 2nd Team All-American (1996 and 1997) and was named the Big Eight Player (now Big 12 Conference) of the Year in 1996. Vaughn lead the Kansas Jayhawks to four NCAA Tournament appearances, including three trips to the Sweet 16 and an Elite Eight appearance. Vaughn’s college jersey was retired on December 31, 2002. Prior to beginning his coaching career, Vaughn spent 12 years playing in the NBA after being selected with the 27th overall pick in the 1997 draft by the Utah Jazz. During his NBA playing career, he made nine playoff appearances and won the NBA Championship in 2007 as a member of the San Antonio Spurs. In 2010, Vaughn was hired as an Assistant Coach for the San Antonio Spurs under Gregg Popovich. After two seasons, Vaughn was hired as the Head Coach of the Orlando Magic, holding that role from 2012 to 2015. In 2016, Vaughn was hired as the lead Assistant Coach by the Brooklyn Nets under Kenny Atkinson.

Jacque and his wife, Laura, have two sons, Jalen and Jeremiah. 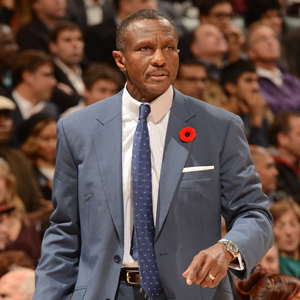 Dwane Casey is the Vice President/Assistant Secretary for the National Basketball Coaches Association. Prior to working in the NBA, Casey spent five seasons as a Head Coach in the Japanese Basketball League and worked with the Japanese National Team. In the summer of 1998, he helped guide Japan to its first appearance in the FIBA World Championship, which marked a first for Japan in over 30 years. Casey began his NBA career as an Assistant Coach with the Seattle SuperSonics where he served from 1994 to 2005 under NBA Head Coaches George Karl, Paul Westphal and Nate McMillan. Casey then served as Head Coach of the Minnesota Timberwolves from 2005 to 2007. Casey also spent three seasons as an Assistant Coach with the Dallas Mavericks under Rick Carlisle where he directed the club’s defense and helped lead the Mavericks to the 2011 NBA Championship. Casey was then hired as the Head Coach of the Toronto Raptors from 2011 to 2018 where he led the Raptors to a franchise-record five consecutive playoff appearances. In 2017-18, Casey won both the NBCA Coach of the Year Award and the NBA Coach of the Year Award. In 2018, Casey joined the Detroit Pistons as their Head Coach.

Dwane and his wife, Brenda, have a daughter, Justine, and a son, Zachary. 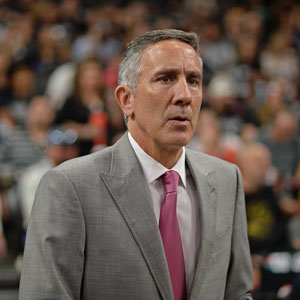 Chip Engelland is the Trustee for the Coaches’ Retirement Plan. Engelland played college basketball for four seasons at Duke University under Coach Mike Krzyzewski. Engelland then went on to play professionally for nine years. First in the Philippines, he spent two seasons and was a member of the Philippine National Basketball Team that won the 1985 Jones Cup Championship. He then returned to North America, playing for the Topeka Sizzlers of the Continental Basketball Association and the Calgary 88’s of the World Basketball League. Engelland started his NBA coaching career in 1999, when he was hired as a Shooting Consultant for the Detroit Pistons under Alvin Gentry. Three years later, he joined the Denver Nuggets as the Assistant Coach/Director of Player Development under Head Coach Jeff Bzdelik. During his tenure at the Denver Nuggets, Engelland also had the pleasure of coaching under two additional Head Coaches, Michael Cooper (2004) and George Karl (2004-2005). Since the 2005-06 season, Engelland has been serving as an Assistant Coach for the San Antonio Spurs where he has won two championships (2007 and 2014).

Chip and his wife, Jessica, have two sons, Press and Path.