Billy Donovan and Mike Budenholzer Named the 2020 Co-Recipients of the Michael H. Goldberg NBCA Coach of the Year Award 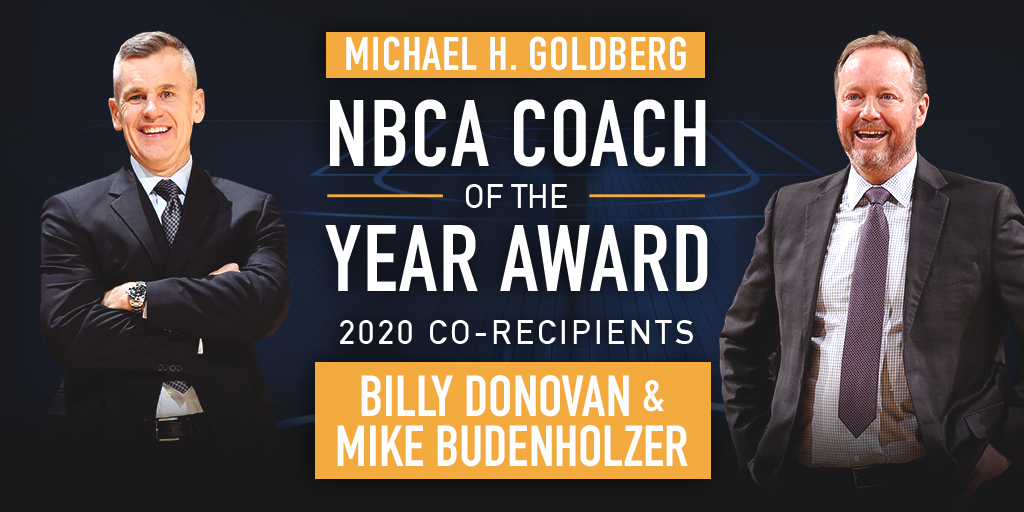 The Michael H. Goldberg NBCA Coach of the Year Award recognizes the dedication, commitment and hard work of NBA Head Coaches and is presented annually to a Head Coach who helps guide his players to a higher level of performance on the court and shows outstanding service and dedication to the community off the court. It honors the spirit of Michael H. Goldberg, the esteemed long-time Executive Director of the NBCA, who set the standard for loyalty, integrity, love of the game, passionate representation and tireless promotion of NBA coaching. It is unique in that it is the only award voted upon by the winners’ peers, the Head Coaches of all 30 NBA teams. This year’s voting was based on games played from the start of the 2019-20 regular season through games played on March 11.

“Congratulations to Mike Budenholzer and Billy Donovan on this prestigious recognition,” said Dallas Mavericks Head Coach and NBCA President Rick Carlisle. “Mike led the Bucks to the best record in the league for a second straight season and Billy became just the fourth active Head Coach to lead his team to the playoffs in each of his first five seasons. To win the vote of our peers makes the Michael H. Goldberg NBCA Coach of the Year Award one of the most meaningful in all of pro sports.”

Coach Budenholzer guided the Bucks to the best record in the NBA (53-12) for the second year in a row. He becomes the first two-time winner of this Award. The Bucks were the NBA’s highest scoring team, averaging 118.6 points per game, and outscored opponents by a league-high average of 11.2 ppg. The 11.2 ppg differential is tied for the fifth largest margin in NBA history. Defensively, Coach Budenholzer’s team held opponents to 107.4 ppg, fifth best in the league. He won Eastern Conference Coach of the Month for December (13-2 record) and February (10-1 record).

“First, congrats to Billy Donovan for the outstanding job he and his staff have done with the Oklahoma City Thunder,” said Milwaukee Bucks Head Coach Mike Budenholzer. “Another great year of coaching by Billy and, again, another great year of work by all the Head Coaches in the NBA. Thank you all for your vote and support. Thank you to our dedicated players and staff in Milwaukee. The players are special, the staff is special and I’m beyond fortunate to coach this great team and for this great organization.

“Celebrating the memory of Michael H. Goldberg and continuing to bring honor to his great legacy of work on behalf of all NBA Coaches gives the Award additional significant meaning. Those of us lucky enough to know and work with Michael know how much he did for the sport and for Coaches. As Michael was a terrific advocate for all of us, may we use our platform to raise awareness and speak out on the need for social justice, equality and inclusiveness in our society.”

Coach Donovan led the Thunder to a 40-24 season, tied for fifth in the Western Conference. He joins Rick Carlisle, Erik Spoelstra and Steve Kerr as the only active Head Coaches to guide their teams to the playoffs in each of their first five seasons. From Thanksgiving through March 11, the Thunder went 34-13, the third best record in the NBA during that period. Since the start of December, Donovan’s team went 19-4 on the road, best in the NBA. Donovan coached the Thunder to wins in 16 games in which they trailed entering the fourth quarter. No other team won more than 8 such games. Donovan won Western Conference Coach of the Month for December (11-4 record).

“I am honored and humbled to be recognized by the Coaches, they are a great group of people that I admire and respect,” said Oklahoma City Thunder Head Coach Billy Donovan. “Receiving the Michael H. Goldberg NBCA Coach of the Year Award alongside such a terrific Coach like Bud makes it even more special.  Individual honors to me have always been a reflection of good team dynamics, and I’m proud of the collective work that our players, coaching staff and the entire organization has put in this season.  I’m looking forward to what’s ahead in Orlando as we get back to basketball and using our platform for social justice.”

“I was fortunate to work alongside Michael H. Goldberg during the formative years of my career,” said David Fogel, NBCA Executive Director. “This year’s winners embody the same high levels of integrity and excellence that Michael displayed every day of his life. Both Coach Budenholzer and Coach Donovan exemplify these values on and off the court, and their tireless work ethic led to accomplished seasons for both the Bucks and Thunder. Congratulations to both Coaches and their staffs. This honor is most deserved.”

The NBCA encompasses all current and former NBA Head and Assistant Coaches. In 1980, just four years after the NBCA was founded, Michael H. Goldberg became its first Executive Director. Building on the existing foundation of the NBCA, he guided it during the years of the greatest growth in professional basketball. He helped gain significant benefits for NBA Coaches, including increased retirement funds and disability insurance. Prior to the NBCA, Goldberg was General Counsel of the American Basketball Association.

The NBA will announce the winner of the Red Auerbach Trophy as the NBA’s Coach of the Year during TNT’s coverage of the 2020 NBA Playoffs.