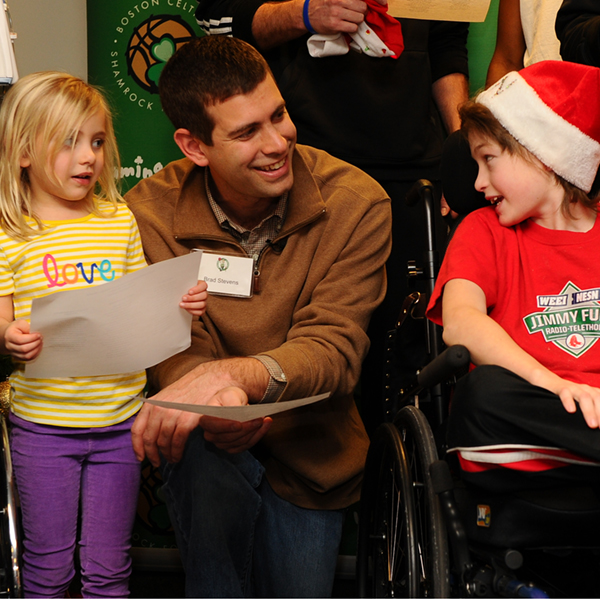 The players interacted with patients, worked on Christmas crafts, and ripped through a medley of holiday hits including Jingle Bells and Rudolph the Red-Nosed Reindeer. [dopwgg id=”25″]

Jeff Green took time to sit and color with patients at Children’s Hospital on Thursday.

Asked about the debut performance of the Celtics Carolers, Brad Stevens said, “[A patient] told me the singing was better than our offense. I told him, ‘I was told I wasn’t a very good singer in high school,’ so that’s probably not a good thing. But, no, it was great. Then [another patient] told me my singing wasn’t very good; he said the defense was OK, though. It’s interesting, I think we got better while we were singing. At least we’re getting an accurate, honest assessment.”

Stevens said it was refreshing to hear the young children be brutally honest about his team.

“I loved it,” said Stevens. “You know what, I absolutely love that. There’s a kid talking passionately about something he’s interested in. Every one of these kids is a kid first. And they’ve all got their likes and dislikes, and things they love, and things they are really passionate about. So whether it’s the Celtics or art or music or whatever the case may be, it’s neat to be able to talk about those things with them.”

During a rare break in the NBA schedule, Stevens said it was nice to bring a little holiday cheer to the patients.

“It’s great,” said Stevens. “The last thing that you want to do is get too caught up in what’s going on that you deem to be important and not be more recognizing of what’s going on around you. And it’s great to be here, it’s great to get a chance to interact with the families and these kids are inspiring, because what they do on a daily basis is real toughness, it’s real grit, it’s all the things that we talk about from a basketball standpoint that’s not real. We don’t face real adversity, these guys are, and they are facing it head on and their spirits are really inspiring and contagious.”

A hospital worker told Lee he was happy to see him still with the Celtics after both he and Bass had swirled in trade rumors with the Houston Rockets. Lee just smiled wide and nodded his head while returning to interact with the patients.