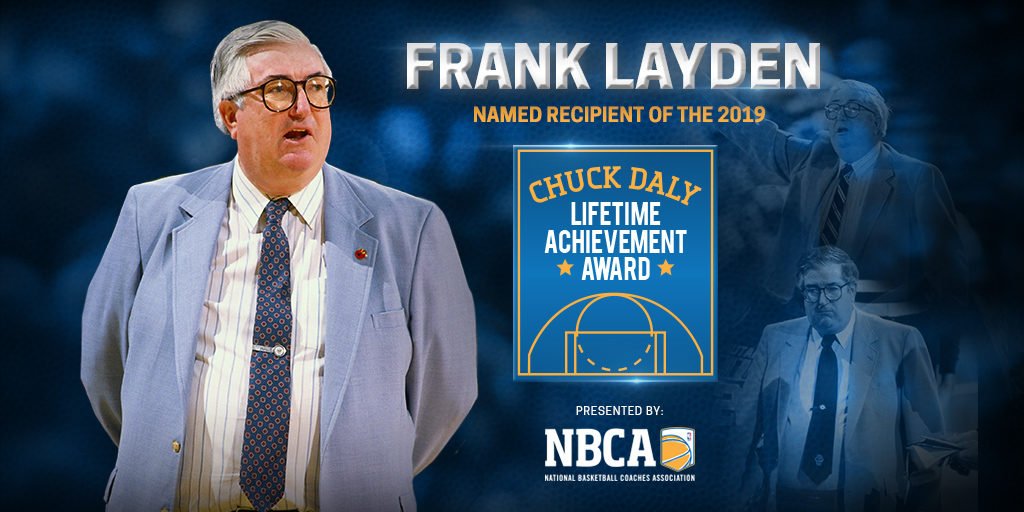 TORONTO, Canada June 2, 2019— Frank Layden, one of the sports world’s most colorful characters and whose impact on the NBA transcended his coaching contributions, is the recipient of the 2019 Chuck Daly Lifetime Achievement Award, the National Basketball Coaches Association announced today.

“Frank Layden represents the very best in coaching,” said Dallas Mavericks Head Coach and National Basketball Coaches Association President Rick Carlisle. “He built a perennial winner in Utah with the Jazz and produced one of the great coaches in NBA history in Jerry Sloan. Frank was also the only person in NBA history to win NBA Coach of the year, NBA executive of the year and the NBA J. Walter Kennedy Citizenship Award in the same year, doing so in 1984. Our sincerest congratulations to Frank Layden on this prestigious recognition.”

“For several reasons, I am overwhelmed and pleased to be named the recipient of this year’s Chuck Daly Lifetime Achievement Award,” said Layden. “First, Chuck Daly was a very good friend of mine for many years before either of us were connected with the NBA, and it is an honor to be recognized by an award of his namesake. Second is the wonderful camaraderie that comes with being a Coach in the NBA. My colleagues were wonderful and the best part of my coaching experience. They were great coaches and even better men. I am honored to accept this award from their ranks and on their behalf. Third, I am saddened that Chuck Daly and Michael Goldberg are no longer with us; two individuals who would’ve loved to be here to witness this today. Michael Goldberg, who played a great role in my life both in guiding me and sometimes holding me back from doing something stupid, does not get enough credit for his impact on the NBA coaching profession. Michael was integral, joining with some of our earlier leaders like
Tommy Heinsohn, in getting the Coaches Association off the ground and giving it tremendous credibility. I can remember Michael Goldberg and David Stern working closely together and
what a wonderful team they were in making the NBCA what it is today. I cannot stress enough how Michael was always there to help me and help other coaches regardless of what team they
represented or how they long they have been in the NBA.”

Lastly, Layden said “I don’t really believe I deserve this award. But having come from Brooklyn and having reached a high level of mediocrity in the coaching profession, on behalf of all the C
students in the world I’m going to take it anyway.” Layden broke into the NBA in 1976 as an assistant coach under Hubie Brown, his Niagara University teammate, for three seasons with the Atlanta Hawks. The then New Orleans Jazz hired him as General Manager in 1979 and after the team moved to Utah, he also became Head Coach in 1981. Layden served in multiple roles in a two decade span with the Jazz, including General Manager (1979-1987), Head Coach (1981-1989) and President (1989-1999). He coached the team to their first five playoff appearances in team history (1984-88). For the 1983-84 season, Layden was voted Coach of the Year and Executive of the Year, becoming the only person in history to win both awards in the same season and only one of four to receive both awards in their career. Red Auerbach, Pat Riley and Larry Bird are the other three. That same season he was the Head Coach of the Western Conference All-Star team and was named the recipient of the J. Walter Kennedy Citizenship Award, given annually to an NBA player or coach who shows outstanding service and dedication to the community.

After he finished his coaching career in 1989, he remained as Jazz team president through 1999, overseeing two NBA Finals appearances and boasting an average of 55 wins per season over his
final 10 years with the team. It was Layden who drafted two future Hall of Famers, Karl Malone and John Stockton, and named a third Hall of Famer, Jerry Sloan, to replace him as Head Coach. The Jazz retired jersey #1 in his honor in 1988.

Layden was known throughout his career for his never-ending promotion of the NBA, speaking to crowds both large and small, always using his trademark sense of humor to make a
connection, or a point. He and his wife Barbara are also well known for their commitment to community service and involvement, both locally and nationally.

Layden was a collegiate player at Niagara University, competing for John “Taps” Gallagher. He became Head Coach at his alma mater in 1968, coaching for 8 seasons, leading the team to the
school’s first-ever NCAA tournament in 1970. He finished his coaching tenure at Niagara in 1976 with 119 career wins, which ranked second in school history to Gallagher at that time.
Layden was inducted into the Niagara University Athletics Hall of Fame in 1981, and his jersey was retired in 2012.

Layden has been inducted into seven Halls of Fame, including the New York City Basketball Hall of Fame, the Utah Sports Hall of Fame and the Greater Buffalo Sports Hall of Fame. In addition, Niagara University named its basketball court after Frank and Barbara Layden in 2014. “Coach Frank Layden had a tremendously successful career as both a Coach and an Executive. Coach Layden always carried himself with dignity and class and was a remarkable ambassador for the game of basketball,” said David S. Fogel, National Basketball Coaches Association
Executive Director. “This honor is well deserved.”

The National Basketball Coaches Association’s Chuck Daly Lifetime Achievement Award honors the memory of Hall of Famer Chuck Daly, who over an outstanding NBA coaching career set a standard for integrity, competitive excellence and tireless promotion of NBA basketball. This year’s award recognizes the extraordinary contributions Frank Layden has made to the sport throughout his NBA career. Through building a body of work that has had a positive and powerful impact on the NBA coaching profession, Layden has embodied the high standards and leadership philosophies that Coach Daly brought to the game.