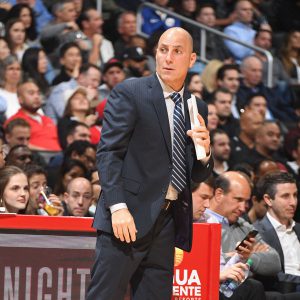 The Clippers catered to Los Angeles’ Armenian fans Tuesday with a themed event they called Armenian Heritage Night. The evening marked the second consecutive season that the NBA franchise has paid tribute to the million-plus Armenians who reside in greater Los Angeles County.

“I’m very proud of my nationality and heritage,” said Clippers assistant coach Rex Kalamian in an interview with the Armenian Weekly. Kalamian is the only known NBA figure, either as a coach or player, who is of Armenian heritage. He explained that basketball has always helped him connect with his culture and observed that there are a lot of Armenians who are invested in the sport. “There is huge interest within the culture, and we’re trying to build more recognition. I’m proud to be the only representative in the NBA right now. I’m fortunate and humbled to be in this position, and with the love and affection that I receive from the community.”