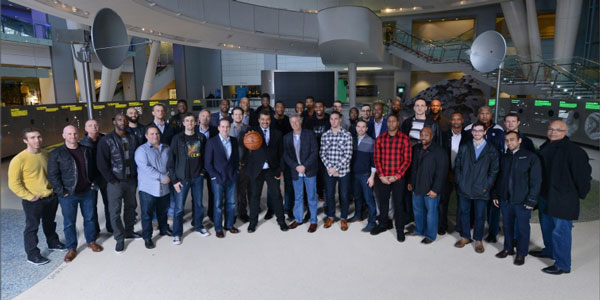 76ers Head Coach Brett Brown took his team to the Hayden Planetarium before their contest with the Nets to help them grasp the “big picture” approach to basketball.  Among the many things the team got to do there, the highlight was talking to famed astrophysicist Neil deGrasse Tyson.
“From time to time, when you go to different places, you see different things,” said Brett Brown.  The worldly head coach described himself as someone who’s “always been a fan” of Tyson.   “I like taking our guys to see different things.  We just sort of timed it where we had [public relations director] Mike [Preston] reach out and say, ‘This is who we are.’”“Out of the blue, he was incredibly receptive, and sent us e-mails, and I got into an e-mail exchange with him,” Brown said of his correspondence with Tyson. “He was just incredibly hospitable, and so incredibly gifted.  He dumbs it down where it’s not astrophysicist speak, and it’s just amazing. You start going through what’s the difference in a comet, an asteroid, a meteor, planet, universes, galaxies, stars, moons, and he zooms out and he zooms in, and you’re sitting there in this unbelievable planetarium with him just talking to us.”
Read the full article here: On the Beat: Planetarium Trip Highlights Brown’s Big Picture Approach
NBA Coaches Association2016-06-08T17:03:03+00:00March 16th, 2016|Coaching Philosophies, Updates|