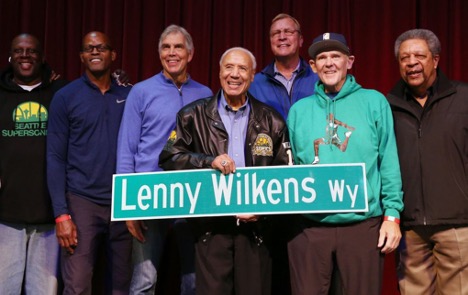 Great work by Larry Stone of the Seattle Times in covering the unveiling of “Lenny Wilkens Way” in Seattle, Washington, which honors the legendary former NBA Coach, Lenny Wilkens. Coach Wilkens, who was the President of the NBA Coaches Association and an integral part of its growth, played and coached in Seattle. Former Sonics Coach, George Karl states, “The way I look at it, Lenny’s the foundation of Sonics basketball.” Not only did Lenny Wilkens have an impact on the court, but off the court, Coach Wilkens has raised millions of dollars for the Odessa Brown Children’s Clinic in Seattle’s Central District, which provides health care for families in need – congratulations Coach Wilkens!