An estimated 50 million people around the globe are living with Alzheimer’s and other dementias (Alzheimer’s is the most common form of dementia). No matter how common it may be, Alzheimer’s is not a normal part of aging. Everyone is at risk to develop Alzheimer’s, a disease that kills nerve cells and tissue in the brain, affecting

an individual’s ability to remember, think, and plan. As the disease advances, the brain shrinks dramatically due to cell death. Individuals lose their ability to communicate, recognize family and friends, and care for themselves. The NBCA encourages you to read below to learn more about Alzheimer’s and the different studies taking place across the United States seeking to provide insight into how diet, exercise, and treating high blood pressure may reduce Alzheimer’s risk and possibly slow cognitive decline. 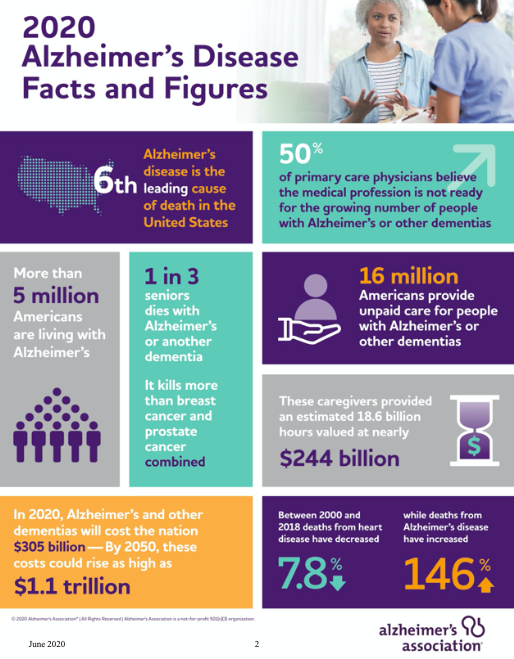 ALZHEIMER’S ASSOCIATION: FIGHTING BACK AGAINST DEMENTIA

The Alzheimer’s Association® is the leading voluntary health organization in Alzheimer’s care, support and research. It was founded in 1980 by a group of family caregivers and individuals who recognized the need for an organization that would unite caregivers, provide support to those facing Alzheimer’s and advance research into the disease.

An estimated 50 million people worldwide are living with Alzheimer’s and other dementias. In the United States alone, more than 5 million have Alzheimer’s, and 16 million are providing unpaid care. The Association addresses this crisis by providing education and support to the millions who face dementia every day, while advancing critical research toward methods of treatment, prevention and, ultimately, a cure.

The following articles highlight the latest research on what can be done to combat this public health crisis.

A MENTAL WORKOUT – Exercise may lower risk for cognitive decline.

While sweating it out on the treadmill, you might think about the good it’s doing for your heart or waistline. But evidence is building that exercise could also be beneficial for the brain.

Recent studies have shown that exercise may reduce Alzheimer’s risk and possibly slow cognitive decline, but what type of exercise, exactly who can benefit, and why, are still largely unknown. A study from the University of Wisconsin found people over 60 at high risk of Alzheimer’s who performed 30 minutes of moderate exercise five days a week had a lower risk of developing the disease and less memory and cognitive problems. 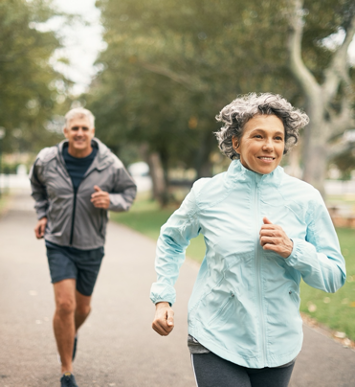 Another study from the University of Kansas found some participants with Alzheimer’s were able to increase their scores on memory tests after routinely exercising, and even increase the size of their brain’s hippocampus, an area of the brain important for learning and memory that is typically impacted early in the Alzheimer’s disease process.

To date, exercise studies have been too small-scale to be definitive or had mixed results regarding the impact on memory and brain function. But researchers have recently launched two rigorous, large-scale studies they hope will provide clearer answers on how exercise can reduce risk.

One promising investigation is the EXERT Study funded by the National Institute on Aging, co-led by Laura Baker, Ph.D., associate professor at the Wake Forest School of Medicine. EXERT is one of the largest and most rigorous studies to date testing how two intensities of exercise can impact memory loss and cognitive decline in people already experiencing problems.

For the first 12 months of the EXERT study, 300 participants exercise for 45 minutes, four days a week under the supervision of a trainer at their local YMCA. Half of the participants do moderately intense aerobic exercises, while the other half do stretching and balancing exercises. In the final six months of the study, participants are encouraged to exercise on their own — to measure if they can stick with the program. At various points in the study both groups are tested on their cognitive abilities.

“We are really not testing whether exercise works, we are testing what type of exercise works,” Baker says. If the study shows positive results, one day people experiencing early signs of cognitive impairment could get a “prescription” for a specific program of exercise to help slow or prevent memory and other thinking problems, Baker says. Early results of EXERT are expected in summer 2021.

Baker is also serving as principal investigator on another study related to exercise called U.S. POINTER. This two-year clinical trial evaluates whether lifestyle interventions that include exercise and simultaneously target multiple risk factors can protect cognitive function in more than 2,000 older adults at increased risk for cognitive decline. The study is the first of its kind in the U.S. and will examine how increased physical exercise, a healthier diet, mental and social stimulation and self management of heart and vascular health impacts risk of cognitive decline.

Depending on the results, lifestyle changes have the potential to be an effective strategy for reducing cognitive decline.

“This groundbreaking project is an unparalleled examination of how lifestyle ‘therapies,’ that include more exercise, may change our brain in ways that may protect against cognitive impairment, including Alzheimer’s disease and vascular dementia,” says Maria Carrillo, Ph.D., chief science officer of the Alzheimer’s Association and member of the U.S. POINTER Study Leadership team. “Depending on the results, lifestyle changes have the potential to be an effective strategy for reducing risk of cognitive decline.”

Current research suggests that sustained, moderate intensity aerobic exercise — such as brisk walking or swimming — offers the most benefit for the brain. While researchers don’t know exactly how exercise helps, many believe it has to do with increased flow of oxygen-rich blood to the brain and improved overall health of the blood vessels, which improves its function. “If we can’t get blood to the critical areas of the brain responsible for memory and other thinking abilities, those functions are not going to work,” Baker says. “Exercise helps clear out the pipes, and helps reduce the buildup of debris, like cholesterol, in our vessels.” Healthy blood vessels also strengthen the brain’s ability to fight or tolerate disease, Baker says.

In studies with rats, exercise was shown to increase the hormones that help develop new connections between nerve cells, which can improve communication between these cells. This improved communication likely benefits cognitive function.

If the EXERT and U.S. POINTER interventions prove effective, these studies could lead the way in the development of accessible and sustainable community-based programs for protecting brain health and deterring dementia.

“We already know that exercise has benefits for cardiovascular disease, metabolic disease, depressed mood, and high stress. We are now studying the potential benefits of exercise for the brain. What other medication do you know of that has multiple benefits for the body and possibly the brain with no negative side effects?” Baker says. “We are looking at an intervention that tests whether exercise can be medicine for the brain for those people who are willing to give it a try.”

A HEALTHY BRAIN STARTS WITH A HEALTHY HEART

The evidence is stronger than ever before that a healthier heart is connected to a healthier brain. Results from the federally funded SPRINT MIND study are gaining widespread attention after being published in the January 2019 Journal of the American Medical Association.

The study shows that aggressively treating high blood pressure in older adults can help reduce the development of mild cognitive impairment (MCI). MCI causes a slight but noticeable and measurable decline in cognitive abilities, including memory and thinking skills. A person with MCI is at an increased risk of developing Alzheimer’s or another dementia.

Researchers found a 19% reduction in risk of MCI in those who managed their systolic blood pressure — nearly 1 in 5 people. By reducing the risk of MCI, we are potentially helping to reduce new cases of dementia.

“The results of SPRINT MIND provide the strongest possible evidence we have to date to guide care for preserving brain health,” says the study’s principal investigator, Jeff Williamson, M.D., professor of Gerontology and Geriatric Medicine at Wake Forest School of Medicine. “I can now confidently tell my patients that getting their systolic blood pressure into the 120s is the one thing we can work on together to reduce their risk for cognitive impairment.”

While findings from the SPRINT MIND study are promising, more research is needed to fully understand the connection between heart health and brain health and what that means for lowering the risk of dementia. The Alzheimer’s Association is funding additional participant follow-up through SPRINT MIND 2.0 to better understand how aggressively treating blood pressure may be key to reducing risk of dementia.

TAKING THE RESEARCH TO HEART

In addition to blood pressure, many risk factors, including genetics, lifestyle and environment, affect the development of dementia. But the initial results of the SPRINT MIND study point to compelling evidence that more carefully managing blood pressure could be one way to reduce your risk of MCI and, ultimately, dementia. “Start by talking to your health care provider about your risk for Alzheimer’s and the best way to manage your blood pressure, especially if you are 50 or older,” says Dr. Maria Carrillo, Alzheimer’s Association chief science officer. “This is a conversation everyone should be having.” 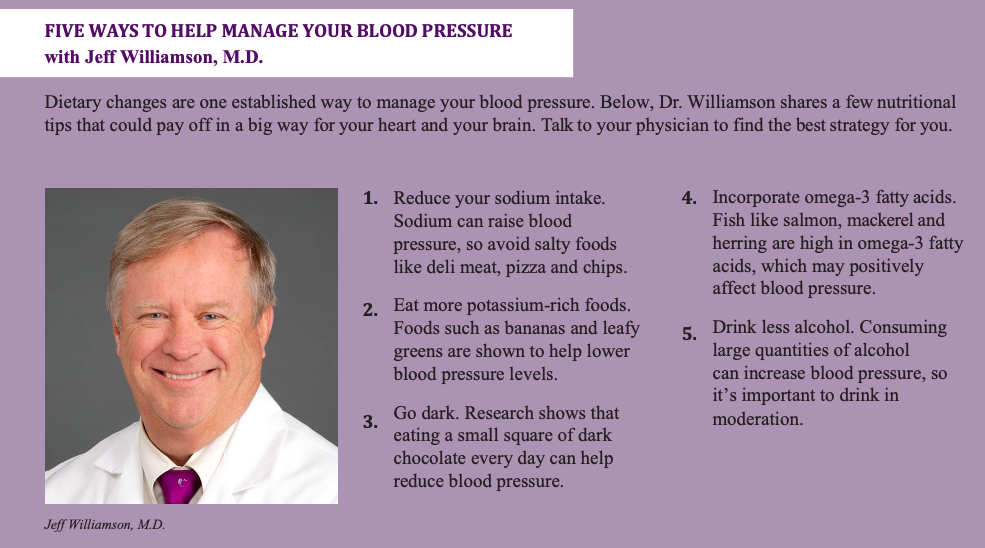 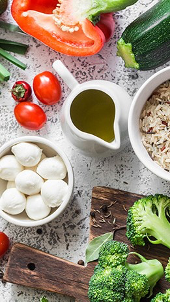 We are constantly reminded to eat well to achieve heart health, lose weight or ward off diseases like cancer. But we often ignore the brain — our most complex organ — when making choices about what to put in our mouths. Just like the rest of the body, the brain is impacted by what we consume and it’s important we feed it well.

While scientists don’t yet fully understand the complex relationship between nutrition and the brain, studies have shown that healthy eating habits can help reduce risk of cognitive decline.

“Although the idea that a healthy diet can help protect against cognitive decline as we age is not new, it is extremely significant,” says Keith Fargo, Ph.D., Alzheimer’s Association director of Scientific Programs and Outreach. “Research continues to demonstrate how powerful good dietary practices may be in maintaining brain health and function.”

While more research is needed to understand the best way food can support brain health, there is growing evidence around several diets indicating they may be able to positively impact cognition. 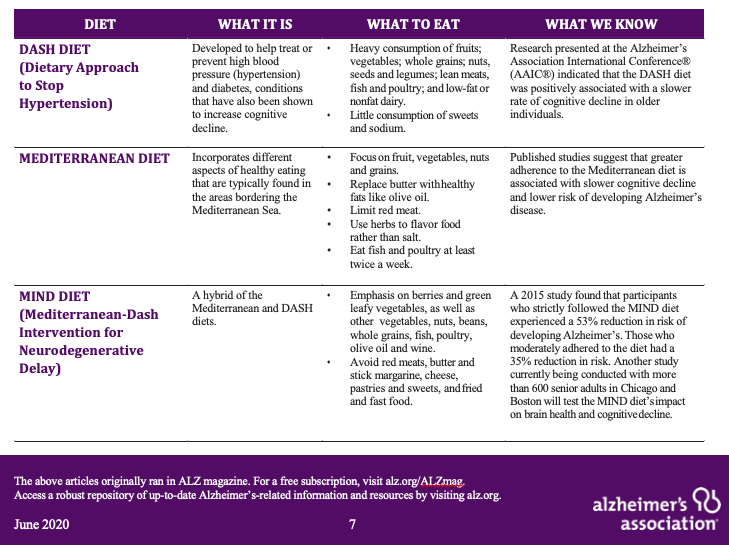 This Health Bulletin aims to spread awareness about Alzheimer’s and other dementias. If you have any questions, would like more information, or would like to get further involved with the Alzheimer’s Association, please feel free to contact the NBA Coaches Association.