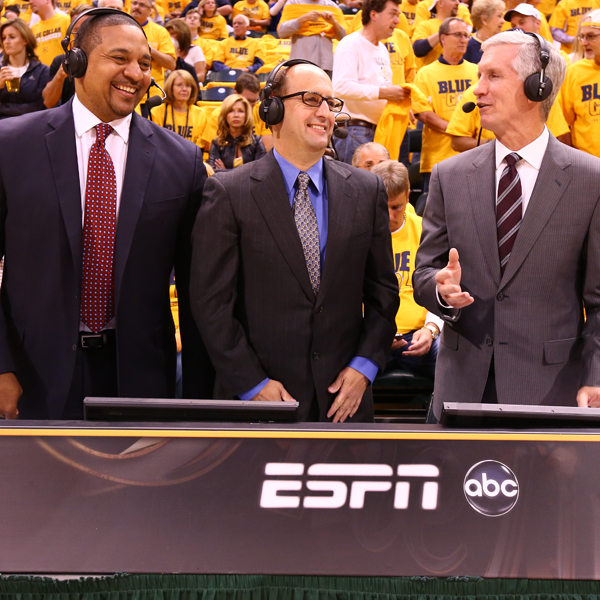 Mark Jackson is returning to the broadcasting booth less than two weeks after being fired as coach of the Warriors.

ESPN announced Saturday the signing of Jackson, who previously worked for the network from 2006 until 2011, to a multi-year contract. Jackson will return to the network as an analyst alongside play-by-play commentator Mike Breen and fellow analyst Jeff Van Gundy.M

“We’re thrilled to welcome Mark back to ESPN and for him to reunite with Mike Breen and Jeff Van Gundy,” ESPN executive John Wildhack said in a statement. “Mark has an outstanding NBA mind, a tremendous on-air presence and he brings a wealth of knowledge both as a player and now as a head coach.”

Jackson’s first assignment will be the upcoming Eastern Conference finals, which begin on Sunday. Prepare yourself for a steady stream of “Hand down, man down” and “Mama, there goes that man.”

The New York Daily News reports that the deal “does not preclude” Jackson from pursuing another coaching job. Jackson’s name has come up in relation to the Knicks’ open coaching job in recent reports.

Jackson, 49, was hired by the Warriors in 2011 after a 17-year playing career and seven-year broadcasting career. He was fired earlier this month despite having one year remaining on his contract.

“Mark Jackson has had a big impact on the improvement of our team and the success that we’ve had over the last couple of years,” Golden State owner Joe Lacob said in a statement. “Nonetheless, we must make some difficult decisions in our day-to-day operations of the club and this would certainly qualify as one of those examples. We wish Mark the best of luck in his future endeavors and thank him for his contributions over the last three years.”

The Warriors have reached agreement with TNT analyst Steve Kerr on a five-year, $25 million contract to replace Jackson.