Mike Woodson and Garden of Dreams 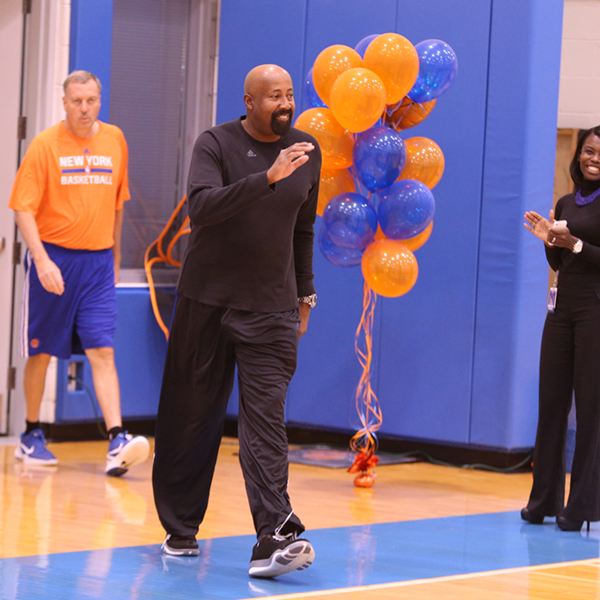 The New York Knicks and Garden of Dreams Foundation kicked off the 2013-2014 season with a Launch Party on October 28, 2013. Garden of Dreams partner organization Harlem Dowling arrived with 125 jubilant children who took to the Knicks practice facility anxiously awaiting the surprises to come. For the first surprise, DJ M.I.L. started the music and the Knicks City Dancers (KCD) ran out to perform the very same dances seen during Knicks games at Madison Square Garden. Throughout the entire performance, the children cheered, sang and danced along with the KCD. Next up, this season’s coaching staff, including Head Coach Mike Woodson and their favorite Knick Players, Carmelo Anthony, Tyson Chandler, Amar’e Stoudemire, Andrea Bargnani, J.R. Smith, Iman Shumpert, Chris Smith, Cole Aldrich and Toure Murrry came out to greet their young fans and take a group photo. Then, it was time to party!

On one half of the gym, children participated in a NBA Fit Clinic where they learned basketball skills encompassing shooting, passing, ball handling and conditioning and received tips from Knicks players, Andrea Bargnani and Cole Aldrich who from time to time would test the children’s shooting skills by blocking a few shots out of bounds. On the other side of the gym, the children indulged in ping pong, skeeball, dome hockey and pop a shot, along with video games, face painting,caricaturists and a magician. Knicks player, J.R. Smith enjoyed his time playing video games with the children and shared, “To see them happy, smiling and cheerful, that’s what it’s all about. It’s a great situation.” He wasn’t the only player to get in on the action though; Iman Shumpert, wearing a Halloween mask and a neon green wig was seen challenging the kids to ping pong games and couldn’t get enough of the pop a shot station!

The children were thrilled to have NBA greats such as Carmelo Anthony, Tyson Chandler and Amar’e Stoudemire spend the afternoon with them, and from the looks of it, the players equally had a blast! Tyson Chandler said, “Any time we have the opportunity to put a smile on a kids face, you know, you have got to take advantage of it.”