Monty Williams Named the 2021 Recipient of the Michael H. Goldberg NBCA Coach of the Year Award

Monty Williams Named the 2021 Recipient of the Michael H. Goldberg NBCA Coach of the Year Award 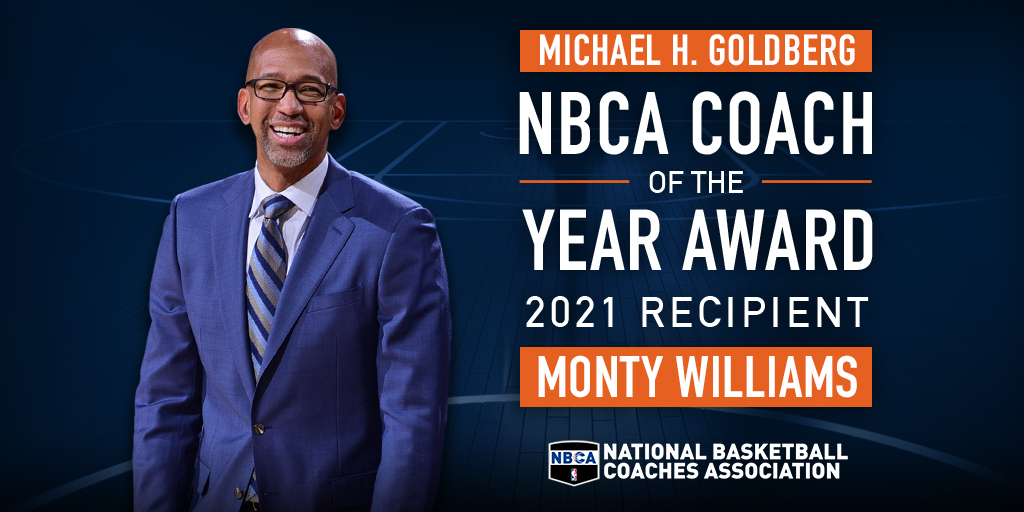 The Michael H. Goldberg NBCA Coach of the Year Award recognizes the dedication, commitment and hard work of NBA Head Coaches and is presented annually to a Head Coach who helps guide his players to a higher level of performance on the court and shows outstanding service and dedication to the community off the court. It honors the spirit of Mr. Goldberg, the esteemed long-time Executive Director of the NBCA, who set the standard for loyalty, integrity, love of the game, passionate representation and tireless promotion of NBA coaching. The award is unique in that it is voted upon by the winners’ peers, the Head Coaches of all 30 NBA teams.

The depth of coaching excellence in the NBA is reflected in this year’s voting as a total of 7 Head Coaches received votes. In addition to Williams, the following also garnered votes: Scott Brooks, Michael Malone, Nate McMillan, Doc Rivers, Quin Snyder and Tom Thibodeau.

“Congratulations to Monty Williams on this most deserving recognition,” said Dallas Mavericks Head Coach and NBCA President Rick Carlisle. “In just two years, Monty has taken the Suns from a 19-63 team to the second-best record in the NBA this season and the Suns’ first Divisional title since 2007. To win the vote of our peers makes the Michael H. Goldberg NBCA Coach of the Year Award one of the most meaningful in all of pro sports.”

Coach Williams led the Phoenix Suns to a 51-21 season, the second-best record in the NBA and their first Divisional title since 2007. The Suns were 43-13 since January 28, the NBA’s best record over that span. Phoenix also had the league’s best road record at 24-12. The Suns ranked 7th offensively and 6th defensively, one of only four teams to rank in the Top 10 in both categories. Their winning percentage of .708 is the fifth best in franchise history.

Just two years ago Coach Williams inherited a team that had finished 19-63 and tied for the second worst record in the league. The Suns won 34 games (in a total of just 73 games) in 2019-20, an improvement of 15 games. This year’s squad improved by 17 (in a total of just 72 games), making the Suns just the fifth team in NBA history to improve by 15 games or more in successive seasons. It is just the third time in 45 years that a team has jumped in the standings from the bottom two to the top two in two seasons or less.

Coach Williams was named NBA Western Conference Coach of the Month for March.

“I am overjoyed to receive the Michael H. Goldberg Coach of the Year Award from the National Basketball Coaches Association,” said Phoenix Suns Head Coach Monty Williams. “I hold the utmost respect and admiration for the coaches in this league, so to be recognized by my peers is an incredible honor. Every coach in our league sacrifices a ton to make their teams and organizations better, so this is unbelievably humbling.

To be recognized in Mr. Goldberg’s honor is special. He had a unique and kind manner, and cared for all of the coaches deeply. His suspenders and bow ties were always on point.

This award is far bigger than myself and is a result of the work put in everyday by our players, coaching staff, and the entire Suns organization under the leadership of James Jones and Robert Sarver. This has been a unique year in its challenges, and I am grateful for the tremendous spirit with which our players and staff have approached each day to make this a special season – Everything Counts!

In reference to my life and career, God knocks the ball out of the park and I get to run the bases. It is a blessing and a privilege to be able to coach this team, alongside this staff, for this organization – it is a get to, not a got to.

To our players and staff, I am so grateful for each one of you. I am blessed to work with you all daily. You truly have made me a better man.”

“I was very fortunate to have had Michael Goldberg as one of my mentors,” said David Fogel, NBCA Executive Director and General Counsel. “Monty Williams embodies the same high levels of integrity and excellence that Michael displayed every day of his life. Coach Williams’ hard work and devotion to his craft led to a remarkable season for the Suns. Congratulations to Coach Williams, the Suns Assistant Coaches, and the entire staff. This honor is most deserved.”

In 1980, just four years after the NBCA was founded, Goldberg became its first Executive Director. Building on the existing NBCA foundation, he guided it during the years of the greatest growth in professional basketball. He helped gain significant benefits for NBA Coaches, including increased retirement funds and disability insurance. Prior to the NBCA, Goldberg was General Counsel of the American Basketball Association.

The NBA will announce the winner of the Red Auerbach Trophy as the NBA’s Coach of the Year during its coverage of the 2021 NBA Playoffs.

For more on the NBA Coaches Association visit: http://www.nbacoaches.com.