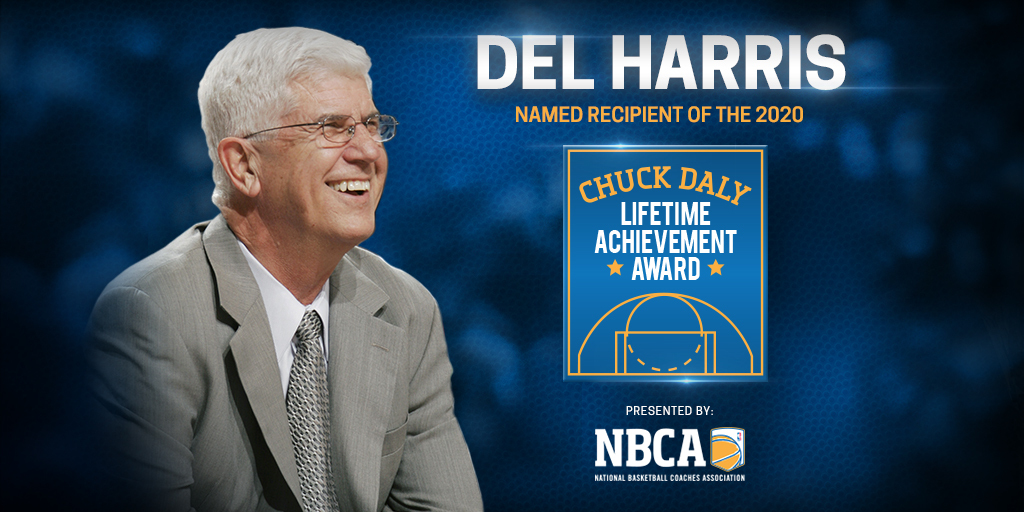 NEW YORK, October 2, 2020—Del Harris, a highly successful NBA Coach for 32 seasons and one of the earliest contributors to the growth of basketball internationally, is the recipient of the 2020 Chuck Daly Lifetime Achievement Award, the National Basketball Coaches Association announced today.

“Del Harris’ impact on basketball extends beyond the NBA and transcends national borders,” said Dallas Mavericks Head Coach and National Basketball Coaches Association President Rick Carlisle. “His success in both the NBA and international competition reflects a lifetime commitment to the global game. Del has been a trusted friend to the game of basketball for over 6 decades. Our sincerest congratulations to Del on this well-deserved and prestigious recognition.”

“It is truly a special honor to be recognized by fellow Coaches and to be added to the list of outstanding Coaches and men who have had the privilege of being recognized along with the great Chuck Daly,” said Del Harris. “Chuck was a master Coach who combined style with technical command, but beyond that was his ability to lead with a firm but soft hand, it seemed to me. He was a tough opponent, but a friend—we even lost money on an oil deal. Wasn’t funny at the time.

“Being honored by my peers is particularly meaningful to me because I coached in an era that many regard to be one with the highest level of the art. Most are in the Hall of Fame and/or have been honored similarly by the Coaches that coached in the 1970s and 1980s with a smaller number of teams. You had to go against a veteran, well-prepared team every game. There were no nights off against inexperienced Coaches; you could never expect to outsmart anyone. Players tended to stay on teams longer; divisional teams played one another many more times and that made up for less film availability as players and Coaches knew tendencies and strategized around it. Several great ones have gone on before, but the committee is full of those from that time that remain. Thanks to you all.

“These Coaches helped form the National Basketball Coaches Association. I was at the meeting when we voted to hire the late and great Michael Goldberg. Lenny Wilkens and several other veterans were leaders in this. We didn’t even have Coaches’ retirement benefits at the time. Now the NBCA, through the leadership of David Fogel and Coach Rick Carlisle, does so many great things as a result of those and succeeding Coaches and the lasting impact of Michael.

“I never imagined I could have been put in a position to be thanking you all for this Award. I didn’t work harder than everyone and I wasn’t smarter. But here I am, deeply thankful for the blessings that have been given me.”

Harris has been involved in basketball for over 61 years and has coached at every level—jr. high school, high school, small college, major college, NBA D (now G) League, ABA, NBA and over 400 FIBA games including the Olympics and two World Championships.

He began his collegiate coaching career in 1965 as Head Coach at Earlham College. In nine  seasons he had a 175-70 record and led the Quakers to three conference championships and the 1971 NAIA tournament. It was while he was at Earlham that he made his first foray into international coaching. In 1969, Harris was invited to coach in the Superior League, Puerto Rico’s premier professional league where the majority of Coaches were NBA, ABA or NCAA veterans. He was the first and only Coach in league history to win three championships, and he compiled a 176-71 record in six summer seasons.

This success opened  the ABA/NBA door and Harris was hired by Tom Nissalke to be his Assistant Coach with the Utah Stars, and then the Houston Rockets before he was named Head Coach of the Rockets in 1979.

Harris was an NBA Head Coach for 14 seasons for the Houston Rockets, Milwaukee Bucks and Los Angeles Lakers, forging a record of 556-457 (.549). In 1981 he led the Rockets to the franchise’s first ever championship series. When he won his 500th NBA game in 1997, he was just the 19th NBA Coach to reach that milestone and his 556 wins currently ranks 29th in NBA history. He was voted NBA Coach of the Year in 1995 in his first year with the Lakers. He was an Assistant Coach for 18 seasons and his teams averaged over 55 wins a year during his last 11 seasons as an assistant. Eight of Harris’ Assistant Coaches went on to become NBA Head Coaches and two others became NBA General Managers.

An author of numerous books on basketball which have been translated in five languages, Harris has coached five different national teams in FIBA competition. In 1974 he led Puerto Rico to a Silver Medal in the Copa Americas and the country’s first ever Gold Medal at the CentroBasket Championship (Caribbean and Central America). In 1994 he assisted Ken Shields with the Canadian national team at the World Championships. He was an assistant to Rudy Tomjanovich’s Bronze Medal winning Team USA at the World Championships in Greece in 1998. In 2004 Harris was the first foreign born Head Coach of the Chinese national team, leading their squad to their best ever finish at the Olympic Games. And in 2011 and 2012 he assisted John Calipari with the Dominican Republic’s national team, winning a Bronze Medal at the Copa Americas in 2011 and a Gold Medal at the 2012 CentroBasket Championships.

Harris was also the Head Coach of the Milwaukee Bucks for the inaugural McDonald’s Championship in 1987, beating a talent-laden Soviet national team in the championship game.

In 2019 Harris was honored by the Naismith Memorial Basketball Hall of Fame with the John Bunn Lifetime Achievement Award, the most prestigious award presented by the HOF outside of Enshrinement. He is a member of six Halls of Fame, including the NAIA HOF, Indiana Basketball HOF and Earlham College HOF. He has won numerous other awards, including the Naismith Foundation’s James Naismith Legacy Award in 2019, the NABC Lifetime International Award in 2017, the John Wooden “Keys to Life” Award in 2014 and the Jerry Colangelo Award for Leadership from Athletes in Action in 2010.

“Del Harris has been successful at every level of basketball and in every country in which he’s coached,” said David Fogel, National Basketball Coaches Association Executive Director. “He has done it with a quiet dignity, tremendous respect for the game and admiration of his fellow coaching competitors. This honor is well deserved.”

The National Basketball Coaches Association’s Chuck Daly Lifetime Achievement Award honors the memory of Hall of Famer Chuck Daly, who over an outstanding NBA coaching career set a standard for integrity, competitive excellence and tireless promotion of NBA basketball. This year’s Award recognizes the extraordinary contributions Del Harris has made to the sport throughout his NBA career. Through building a body of work that has had a positive and powerful impact on the NBA coaching profession, Harris has embodied the high standards and leadership philosophies that Coach Daly brought to the game.

For more on the National Basketball Coaches Association visit: http://www.nbacoaches.com