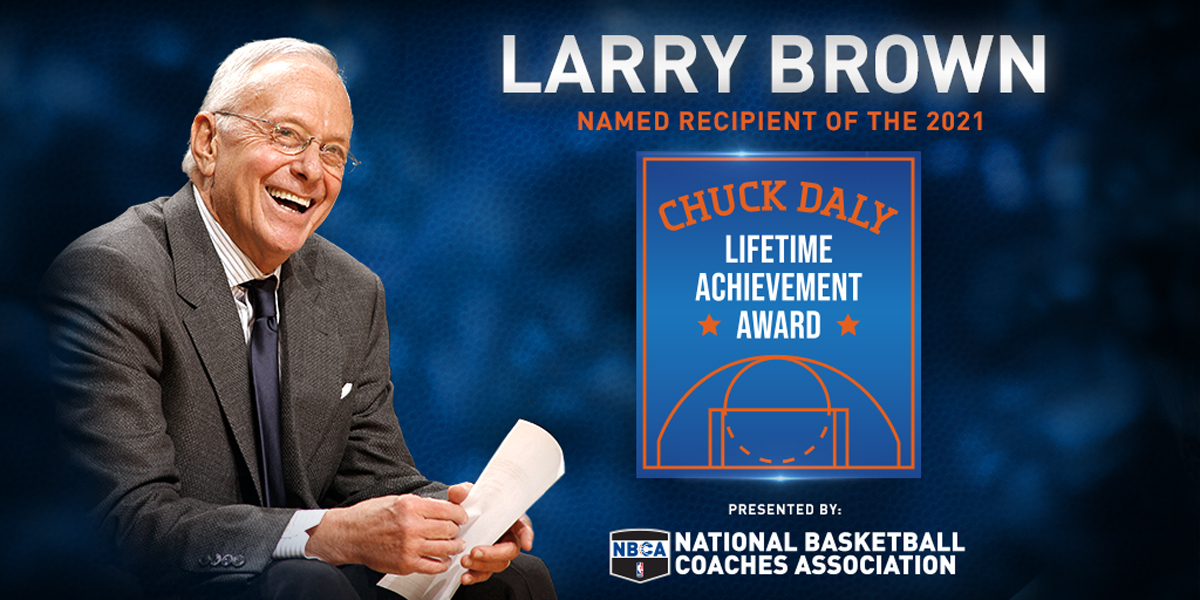 NEW YORK, July 8, 2021—Larry Brown, widely and highly regarded as one of the game’s premier teachers, and the only coach in history to have won both an NBA and NCAA Championship, is the recipient of the 2021 Chuck Daly Lifetime Achievement Award, the National Basketball Coaches Association announced today.

“Larry Brown has achieved coaching success at the highest levels of basketball in a career that began in 1965 as an assistant to Dean Smith at the University of North Carolina,” said Indiana Pacers Head Coach and National Basketball Coaches Association President Rick Carlisle. “Not only is he a Hall of Famer and the only coach to have won an NBA and NCAA Championship, he has won multiple Olympic medals and numerous Coach of the Year Awards. Larry’s ‘Coaching Tree’ is ridiculously wide-ranging and includes close to fifty current or former Head Coaches. Congratulations to Larry on this well-deserved and prestigious recognition.”

“I am honored to receive the Chuck Daly Lifetime Award for multiple reasons,” said Larry Brown. “Chuck Daly was a great coach and a great person whose work and legacy are appropriately celebrated with this award. To be mentioned in the same conversation with the previous recipients is truly humbling. I want to thank all of the Coaches with whom I coached and those I coached against, so many of whom are great competitors and friends. And thanks to the players I had the good fortune to coach. I am very proud of what my teams accomplished. Lastly, I want to thank the NBA Coaches Association and the Selection Committee for this honor.”

Most coaches make their mark in either professional or collegiate basketball. Coach Brown made his mark wherever he coached. He began his coaching career in 1965 as an assistant to Dean Smith at the University of North Carolina, his alma mater. But, after two seasons, he still wanted to play, so he began a five-year playing career in the ABA. He was a member of the 1968-69 Oakland Oaks Championship team, a three-time All-Star and MVP of the 1968 All-Star Game.

Brown returned to coaching in 1972 as Head Coach of the Carolina Cougars in the ABA. For the next forty-seven years Brown enjoyed success in the ABA, NBA, NCAA, and international competition amassing over 1,700 total wins.

“Larry Brown’s reputation as a teaching coach is well-known and well-deserved throughout the sport,” said David Fogel, National Basketball Coaches Association Executive Director and General Counsel. “He has improved his teams throughout his career and his successes at the professional, collegiate and international levels represent a lifetime dedicated to basketball. Congratulations to Coach Brown on an incredible career and the Chuck Daly Lifetime Achievement Award.”

The National Basketball Coaches Association’s Chuck Daly Lifetime Achievement Award honors the memory of Hall of Famer Chuck Daly, who, over an outstanding NBA coaching career, set a standard for integrity, competitive excellence, and tireless promotion of NBA basketball. The award is selected annually by a Selection Committee comprised of some of the most respected coaches and basketball executives in the game, including Bernie Bickerstaff, Billy Cunningham, Joe Dumars, Phil Jackson, Gregg Popovich, Pat Riley, Donnie Walsh, and Lenny Wilkens.

For more on the National Basketball Coaches Association visit https://nbacoaches.com/