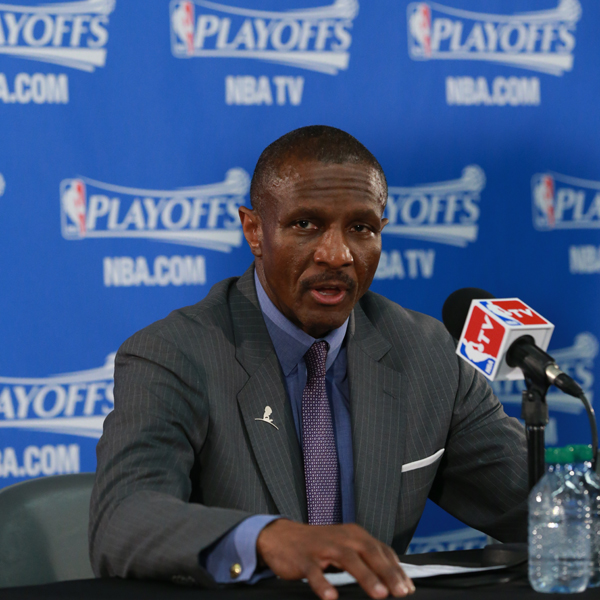 TORONTO (AP) — Dwane Casey never wondered what kind of suitors he might attract after leading the Raptors to a record-setting season and a division title. He already knew he wanted to stay in Toronto.

The Raptors made Casey’s return official Tuesday, announcing a three-year contract extension for the coach whose team won a franchise-best 48 games this season and ended a six-year playoff drought. Toronto lost to Brooklyn in Game 7 of the first round Sunday.

Casey took a pass when general manager Masai Ujiri first approached him about a new deal in late March, saying he’d rather wait until the season was over. He wasn’t playing hard ball; he just didn’t want to be a distraction. A wider job search, Casey insisted, was never on his mind.

“It would be so disingenuous to go out and even put your foot out in the market,” Casey said. “I didn’t even give it a second thought. My heart is here. My mind is here.”

Casey was hired by former GM Bryan Colangelo in June 2011, shortly after winning a championship in Dallas as an assistant to Rick Carlisle. He got his first head coaching job with Minnesota in 2005 but was fired in January 2007.

When Ujiri was hired to replace Colangelo last May, Casey was entering the final year of his contract and looked to be on shaky ground.

While Casey acknowledged “it wasn’t all roses” with his new boss, the two men didn’t take long to develop a trusting, open relationship.

Toronto started 6-12 this season, and Ujiri acknowledged Tuesday that more rebuilding was in the plans after Rudy Gay was traded to Sacramento in a seven-player deal in December. Instead, Toronto went on a tear, going 41-22 after the trade, the best record in the Eastern Conference.

The surprising success fostered a strong sense of camaraderie among the Raptors, exemplified by an “I’m all in” document Casey drafted and had the whole team sign at their first meeting after the All-Star break.

Casey kept the paper in his briefcase after that, carrying it around with him the rest of the season.

“I’m probably going to frame it,” he said.

Casey said winning against the odds, and the sense of togetherness in Toronto’s locker room, made this “one of the most fruitful years I’ve had in coaching and been around in coaching, even throughout the (Dallas) championship.”

Casey is likely to have most of the same players back next season. Ujiri made it clear he’s more focused on long-term growth than splashy signings.

“For me, there’s not going to be any crazy decisions,” Ujiri said. “There’s no quick fix. We’re a growing team and we’re going to grow gradually. I really don’t care what the expectations are.”

Ujiri would like a bigger wing player and a shot blocker and said he’s “optimistic” he’ll be able to strike a deal with free agent point guard Kyle Lowry, who averaged career highs of 17.9 points and 7.4 assists this season.

“Negotiating is easy for me if we want Kyle to be here and Kyle wants to be here,” Ujiri said. “We’ll be fair with Kyle and we’ll figure it out. It’s important.”

Casey said Ujiri has arranged for center Jonas Valanciunas to work out this summer with Hall of Famer Hakeem Olajuwon. Patterson and All-Star guard DeMar DeRozan are also expected to work out with Olajuwon.

Ujiri opened his remarks by apologizing again for using a profanity about Brooklyn before the Game 1 of the playoffs. He ended with a plea for action on the recent kidnappings of girls in Nigeria, where Ujiri and Olajuwon were born and where Ujiri’s mother and sister still live. Several hundred young girls have been kidnapped by Islamic militants in Nigeria, which Ujiri called “an absolute atrocity.”