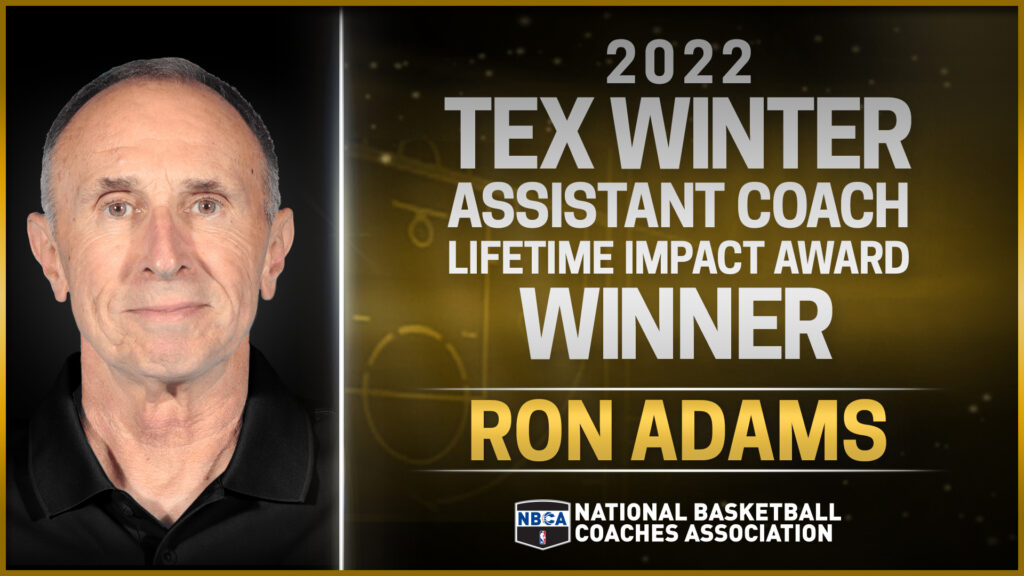 “Ron Adams embodies everything that makes a great Coach. He is passionate about teaching, has a great basketball IQ, a tireless work ethic, fierce loyalty, and a deep love for the game,” said Rick Carlisle, Indiana Pacers Head Coach and NBCA President. “His efforts and dedication have earned him four NBA titles in the last eight years and the respect of players and coaches throughout the league. Congratulations to Coach Adams on the 2022 NBCA Tex Winter Lifetime Impact Award.”

“I am honored and very humbled to have been selected for the Tex Winter Assistant Coach Lifetime Impact Award,” said Ron Adams. “First of all, to my family – my wife, Leah; my son, Jerid; and my daughter, Hayley: you are at the top of the list of those who have enriched my life. So many great people, educators, and coaches have helped shape my career. Your instruction, encouragement, and correction were invaluable, and I am grateful beyond words.

“A special thanks to all the Head Coaches in the NBA I have worked with – Jerry Tarkanian, John Lucas, George Karl, Bill Cartwright, Jim Boylan, Scott Brooks, Tom Thibodeau, Brad Stevens, and Steve Kerr.  All of you respected me, and you all were very kind to me and my family.

“Lastly, and most important, I want to thank all the NBA players I worked with over the past 30 years who have brought joy and meaning to my life. Watching you grow as players and as men is the real highlight of my career.”

Coach Adams is entering his 54th season of coaching and his 30th in the NBA, 28 of them as an Assistant Coach. He began his coaching career in 1969 as an Assistant Coach at Fresno Pacific College, his alma mater, and coached collegiately for over two decades, including stops at UC Santa Barbara, Fresno State, UNLV, and Drake. He was Head Coach at both Fresno Pacific College (1972-1975) and Fresno State (1986-1990).

For the last eight seasons, Adams has been an Assistant Coach for the Golden State Warriors, winning the NBA Championship in four of those seasons. Upon joining the Warriors, Coach Adams guided the team’s defense to a top four defensive ranking in each of his first four seasons. For five consecutive seasons, from 2014-2015 to 2018-2019, Coach Adams was voted the Best Assistant Coach in the NBA’s annual GM survey. His teams have made 19 Playoff appearances. He has also coached professionally in Belgium and Japan, as well as for the Canadian National Team.

“Assistant Coaches generally operate behind the scenes and don’t receive nearly enough public recognition for their team’s success. However, any Head Coach will tell you that they are an indispensable part of the team equation,” said David Fogel, NBCA Executive Director and General Counsel. “Coach Adams’ contributions to the success of his teams, most recently the Golden State Warriors, are well known inside the NBA. Off the court, Ron’s sage advice and wisdom has helped many players, coaches, and executives excel in their own careers. Congratulations to Coach Adams on this well-deserved honor.”

About the NBCA: The National Basketball Coaches Association (NBCA) is the labor organization that represents basketball coaches in the National Basketball Association (NBA). Founded in 1976 by legendary Boston Celtics player and coach, Tommy Heinsohn, the NBCA consist of all NBA Head Coaches, Assistant Coaches, and alumni, and works closely with the NBA on all matters that pertain to the coaching profession.

For more on the NBCA visit: http://www.nbacoaches.com