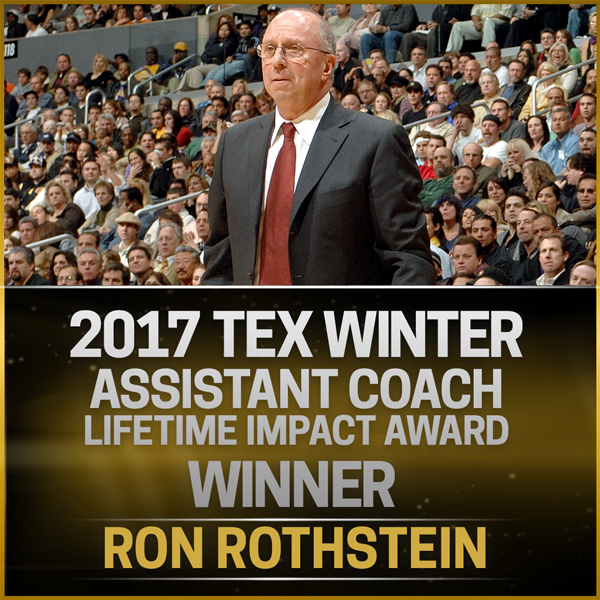 “Ron Rothstein is most deserving of this prestigious recognition. Over several decades, Ronnie has helped countless players and coaches become their very best while continually helping promote the NBA game. I had the privilege to work with Coach Rothstein during the 2003-04 season. As an assistant for me in Indiana that year, Ron was a high impact contributor to our Pacers team that set a franchise record with 61 wins. More recently, Ronnie was top assistant to Erik Spoelstra during Miami’s run of back to back Championships in 2012 and 2013,” said Dallas Mavericks Head Coach and NBCA President Rick Carlisle.

“I would like to thank the NBCA for the honor of being chosen as this year’s recipient of the Tex Winter Assistant Coach Lifetime Impact Award. This is not only an honor, it is also a truly humbling experience, said Rothstein.

“Over the course of my 22 years as an Assistant Coach, I have been fortunate enough to work for seven outstanding Head Coaches. It all started in 1979 when Mike Fratello recommended me to Hubie Brown, then Head Coach of the Atlanta Hawks. Hubie hired me as a part-time regional NBA scout while I was still a high school teacher and coach. My first full-time Assistant Coaching job was with Mike Fratello and the Atlanta Hawks.  Following that, I joined Chuck Daly and the Detroit Pistons.  Next, I rejoined Mike Fratello with the Cleveland Cavaliers, followed by Rick Carlisle and the Indiana Pacers, and then finished the last 10 years of my coaching career with the Miami Heat, working for Stan Van Gundy, Pat Riley and Erik Spoelstra. Not many Coaches get as lucky as I did to work with and for so many brilliant and successful Head Coaches. I can’t thank them enough for all that they have done for my family and me over the course of my career.

“Thanks, also, to the GM’s I have had the privilege to work for:  Stan Kasten (Atlanta Hawks), the late Jack McCloskey (Detroit Pistons), Wayne Embry (Cleveland Cavaliers), Donnie Walsh/Larry Bird (Indiana Pacers) and Pat Riley (Miami Heat).  Not many Coaches can put together a list like that. What a privilege it was to work for them.

“To all the players I have had the good fortune to work with, thank you for all that you have done to contribute to my success. Obviously, none of this was possible without your dedication, hard work, talent, and professionalism.

“Last but not least, a huge thank you to my beautiful wife of 51 years, Olivia, who has been by my side every step of the way, and to my children and grandchildren, as well, for all their love and support.”

Rothstein, who has spent over 50 years in the game and 26 years on an NBA bench, began his NBA career in 1979 as the northeastern U.S. regional scout for the Atlanta Hawks. In 1982, he moved to a similar position with the New York Knicks before becoming an Assistant Coach with the Hawks in 1983. After spending three seasons on the Hawks bench, Rothstein joined the Detroit Pistons coaching staff as an Assistant Coach in 1986 where he was credited with establishing the defensive mindset and principles that helped the Pistons reach the Eastern Conference Finals in 1987 and the NBA Finals in 1988.

Prior to joining the NBA, Rothstein was a high school coach for 19 years and was selected Westchester County (NY) Coach of the Year in 1979 while at Eastchester High School in New York.

The National Basketball Coaches Association Tex Winter Assistant Coach Lifetime Impact Award honors the tremendous achievements and commitment of Hall of Fame Tex Winter, who over an outstanding NBA coaching career set a standard of integrity, competitive excellence, loyalty, and tireless promotion of NBA basketball. This year’s award recognizes the extraordinary contributions Ron Rothstein has made to the sport throughout his NBA career through building a body of work that has had a positive and powerful impact on the NBA coaching profession. Coach Rothstein embodies the high standards and leadership philosophies that Tex Winter brought to the game.