Saunders stepping in to coach Timberwolves 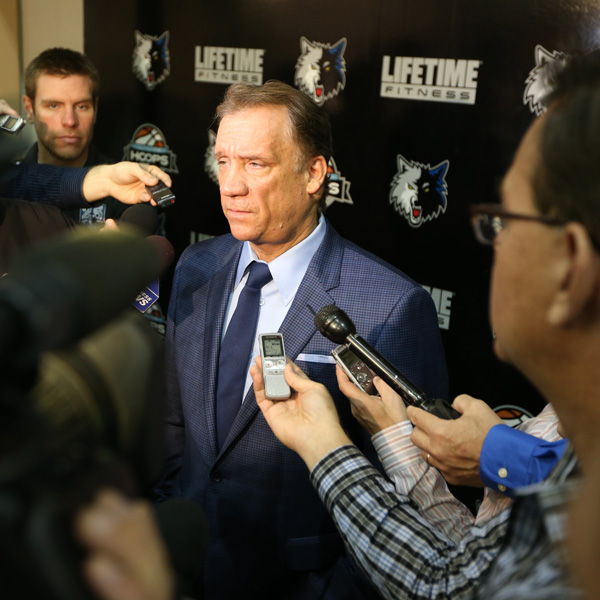 Now that the organization is shrouded in uncertainty surrounding the long-term future of star forward Kevin Love, Saunders is returning to the bench to try revive a franchise that hasn’t made the playoffs in 10 years.

With the team’s coaching search complicated by Love’s status, the Timberwolves decided the best course of action was to have Saunders, who was hired last season as president of basketball operations, step in for a second stint as coach until the situation stabilized, two people with knowledge of the situation told The Associated Press on Thursday. The people spoke on condition of anonymity because the team has not officially announced the move. A news conference was scheduled for Friday.

Saunders previously coached the Timberwolves from 1995-2005. He won 411 games in 10 1/2 seasons in Minnesota and guided the Wolves to the only eight playoff appearances in franchise history, including the Western Conference finals in 2004. He has a career record of 638-526 in 16 seasons as an NBA head coach, a career that also includes stops in Detroit and Washington.

Saunders is joining a short list in the NBA of coaches that also have final-say executive authority, one that includes newly hired Stan Van Gundy in Detroit, Doc Rivers with the Los Angeles Clippers and, to a certain extent, Gregg Popovich in San Antonio. Saunders will continue to work closely with GM Milt Newton in the front office while handling coaching duties.

When Rick Adelman retired at the end of the regular season, he did so in part to try to help the Timberwolves move forward with a plan to show Love, a three-time All-Star who can opt out of his contract next summer, that there was a long-term plan in place for success.

Saunders was in the market for a coach with extensive head coaching experience, either in the NBA or at a major college program, one that could command the respect of a young locker room and also handle the media scrutiny that comes with the questions surrounding Love. Names like Tom Izzo, Billy Donovan and Fred Hoiberg came and went without any traction.

The Wolves hosted Memphis coach Dave Joerger for an interview two weekends ago, but Grizzlies owner Robert Pera sweetened his contract to keep him around. Sam Mitchell, Lionel Hollins, Scott Skiles and several others received consideration as well.

Unable to find what they felt was the right fit for a delicate job, Saunders and owner Glen Taylor met this week to reassess the situation. Taylor said when he brought Saunders back as team president that he would not put him back on the bench. He fired Saunders as coach once before, in 2005 when Latrell Sprewell and Sam Cassell, unhappy with their contracts, submarined the follow-up to the team’s stirring run to the Western Conference finals.

Saunders was also hopeful that he could find someone other than himself to take over the team. But with Love’s status preventing them from pursuing the coaches they felt would fit best, the two decided that Saunders should take over for at least this season if not longer.

The Timberwolves have not given up on convincing Love to play out this season in Minnesota and re-sign next summer to a contract that can pay him and extra year and about $26.5 million more than any other team. It was not immediately clear what the appointment of Saunders would do for Love’s desires to stay or go.

Love has yet to make the playoffs in his six seasons in the league and is believed to be growing impatient with the Wolves, who finished 40-42 and in 10th place in the West this year. Love created a stir when he spent last weekend in Boston, where the Celtics are rumored to be making a run at trading for the 25-year-old power forward before the June 26 draft.

Just how long Saunders will coach remains to be seen.

There is the possibility that Saunders will add assistants to his staff who could be groomed to eventually take over. The Wolves were expected to reach out to Mitchell, a former Timberwolves player and Raptors head coach, and David Blatt, who has spearheaded Russia’s return to Olympic relevance and coaches in Israel, to gauge their interest in joining his staff.