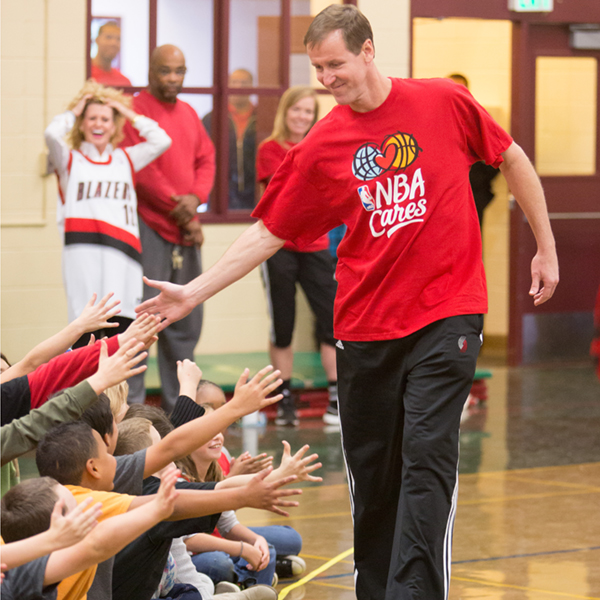 LaMarcus Aldridge on being a leader: “Just trying to always talk to the young guys about the plays or seeing if they need some help, trying to be a really good leader, trying to work hard every day, make sure guys know that it takes hard work to win. I think if I’m there everyday and I’m leading like that, then that’s good for them.”

Damian Lillard on treating people equally: “I try to be cool with everybody. There’s people that you guys go to school with right now that might not be a part of the cool crowd or you guys might not be familiar with who they are. You don’t know what they’re going through. It could be something at home, it could be something with friends that are outside of school. A lot of the people I went to school with and people that I didn’t know at school, later in life, some of them became my better friends. Had I know the type of people they were at this age that you guys are right now, we probably would have been friends then. So I would say be aware of how you treat people at this age because it can hurt them. A lot of people go through things at this age and it affects them later on in life, so make sure you guys treat each other how you want to be treated.”

Terry Stotts on being a part of a team: “Everybody, whether you know it or not, you’re all part of a team. You’re all part of a team. It could be a team that you goes to the library together. A team doesn’t have to be an athletic team. When you are part of a group — and all of you are part of a some group — that makes you a team and when you look out for the people in your group, when you look out for the people on your team, that just enriches them and it makes you a better person. More things get done, more positive things get done, when you as a group member, when you as a team member, help each other out.”

LaMarcus Aldridge on being kind to others: ““You never know who anybody can be. Some didn’t know how cool Paul Allen was, but I think looking back some guys are probably mad that they weren’t nice to him. So I think everybody should be treated equally.”

Damian Lillard on the importance of NBA Cares events: “It’s big because of the impact we can have on them because of who we are as basketball players. So what we say goes a long way to them. I think it’s important for us to be able to come out and do stuff like this. It’s always fun because you remember times like this as a kid.”

Principal Susan Blue on the team coming to Ockley Green/Chief Joseph: “They were so surprised. They had no idea the players were coming. They thought it was a pep rally. It’s Spirit Week and we called it “Blazer Day” so they were thrilled. It was great. Really good.”