The Long Lasting Friendship Between Steve Kerr and Gregg Popovich 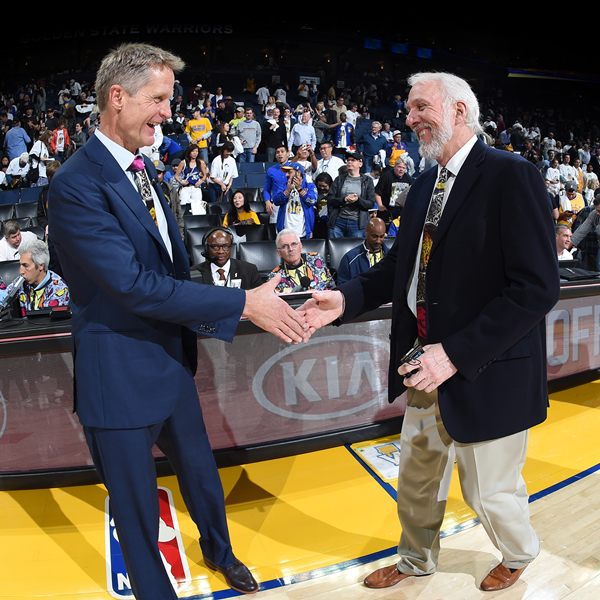 OAKLAND – Gregg Popovich has no interest in running for president of the United States, but he was willing to entertain a hypothetical question about it: If he did run, would he choose Steve Kerr to be his Vice President?

Popovich initially chuckled, brushing off the idea of a political career. Then he revealed just how much he respects Kerr, who played under him 15 years ago and has gone on to become a two-time championship coach with the Golden State Warriors.

“I should be his Vice,” Popovich told The Bay Area News Group.

They’re two of the most respected basketball coaches in the NBA. They’re also close friends who share similar views on social and political issues. Their words have resonated with many people, inspiring websites that support them as a presidential ticket. One of them, www.popovichkerr2020.com, has created mugs and T-shirts in the style of campaign posters.

But, unfortunately for their supporters, Kerr and Popovich also have something else in common.

“Both of us realize that we’re not built or qualified for such an office, nor do we desire it,” Popovich said.

There’s a deep well of respect between Popovich and Kerr. They sing each other’s praises, jokingly take shots at each other in media sessions and genuinely feel a bit torn when their teams play each other. Thursday night won’t be easy for either of them.

“It’s awkward because I hate to see him ever lose,” Popovich said. “And if we would win, which was rare, you’d still feel a bit badly for him. And I’m sure he felt vice versa.”

They met in 1998, back when Popovich, now 69, wasn’t yet the venerated architect of a franchise that has made 20 consecutive playoff appearances and won five NBA championships.

“Pop wasn’t Pop yet,” Kerr said. “He was a young coach. I didn’t know what to expect. But I liked him immediately on a personal level. He was a straight shooter. I know he cared about me and cared about all of the guys on the team.”

Popovich asked Kerr about his family, including his father, Malcolm, an American academic who was assassinated in Beirut in 1984 in an act of terrorism.

Kerr had played under some great coaches, including Lute Olson at the University of Arizona and Phil Jackson with the Chicago Bulls. But Popovich always did things differently.

Popovich used to divide players into shooting groups based upon their political beliefs. He’d say if you voted for George W. Bush, head to this end of the court. If you voted for Al Gore, head to that end. One time he used the tax increase; those in favor in one group, those opposed in the other. It was always something new, something that encouraged his players to broaden their horizons.

“It was just a good way of making guys think,” Kerr said.

Whenever discussions broke out over those issues, Kerr always stood out. He was thoughtful and opinionated. He’d speak up, ask questions and express his views. It made a big impression on Popovich, a graduate of the Air Force Academy who once had considered a career with the Central Intelligence Agency.

“That’s where it started and we just continued from there,” Popovich said. “We’ll text each other right now when something will happen or something will be said by the current administration that’s just mind-blowing and nobody does anything about it. The congressmen are all sitting on their thumbs afraid of him. It always intrigues us.”

To continue reading, click here: Steve Kerr and Gregg Popovich open up about their relationship