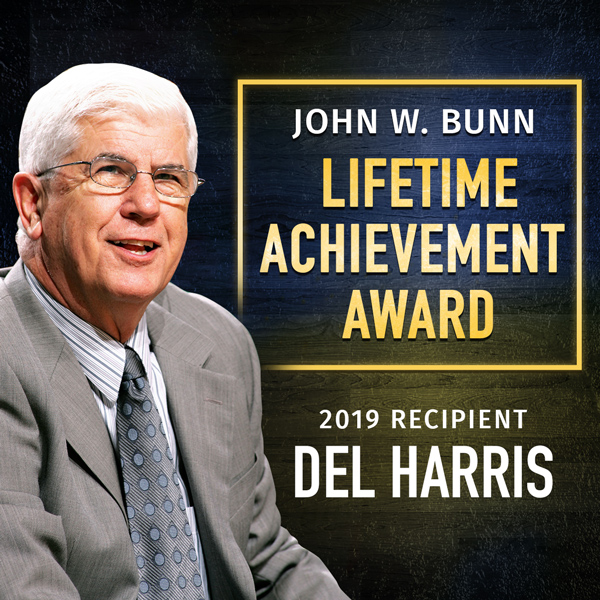 Announced today by the Naismith Memorial Basketball Hall of Fame at NBA All-Star weekend, the winners of the 2019 John W. Bunn Lifetime Achievement Award are Del Harris, a respected coach who has served at every level of the game in his 50-year career, and Harry Glickman, the “father” of professional sports in Oregon. Both Harris and Glickman will be honored at Enshrinement Weekend in Springfield, Mass., the birthplace of basketball, during Enshrinement Weekend in September of 2019.

The Bunn Lifetime Achievement Award was instituted by the Basketball Hall of Fame’s Board of Trustees in 1973 and is the most prestigious award presented by the Hall of Fame outside of Enshrinement. Named in honor of Hall of Famer John W. Bunn (Class of 1964), the first chairman of the Basketball Hall of Fame Committee who served from 1949-1964, the award honors coaches, players and contributors whose outstanding accomplishments have impacted the high school, college, professional and/or the international game.

“The Basketball Hall of Fame is pleased to announce and recognize two recipients of this year’s Bunn Lifetime Achievement Award – Del Harris and Harry Glickman,” said Jerry Colangelo, Chairman of the Naismith Memorial Basketball Hall of Fame. “These gentlemen have dedicated their lives to sports, while improving the lives of others and changing the sport landscape in monumental ways. We are thankful for their efforts and contributions toward the game we celebrate every day at the Hall of Fame.”

Del Harris has dedicated his lifetime to basketball, serving as a coach, mentor and tireless advocate for the game. In his more than 50-year coaching career, he has coached every level of the sport, ranging from junior high hoops to the National Basketball Association.

Following a successful high school coaching stint in his native Indiana, Harris spent nine seasons at Earlham College where he led the Quakers to a total of 15 conference and tournament titles. In his early career, he coached internationally in Puerto Rico and the European Professional Basketball League. In 1998, Harris served as an assistant with USA Basketball, earning a bronze medal at the FIBA World Championships in Greece. In 2004, Harris was the first foreigner to coach the Chinese National Team, where he coached Hall of Famer Yao Ming.

In the ABA, Harris served as an assistant with the Utah Stars before joining the NBA coaching ranks. For over 35 years, he served as both a treasured assistant coach and head coach of several franchises including the Houston Rockets, Milwaukee Bucks, Los Angeles Lakers, Dallas Mavericks, Chicago Bulls, and New Jersey Nets. Harris led the Houston Rockers to the NBA Finals in 1981 and was recognized as the NBA Coach of the Year in 1995 while at the helm of the Los Angeles Lakers. Harris currently serves as Vice President of the Mavericks G League affiliate, the Texas Legends, while providing game analysis for the Mavericks on Fox Sports Southwest.

Born in 1924, Glickman was raised by immigrant parents from Poland in Portland, where he actualized the American dream and established himself as the “father” of professional sports in Oregon. A graduate of the University of Oregon with a degree in journalism, Glickman pursued a career as a sportswriter before enlisting for World War II. After spending three years at the 12th Armored Division of the 7th Army, he returned to Portland and was unable to find a position in his desired field, leading him to the world event promotion.

Glickman opened a company called Oregon Attractions and promoted everything from boxing to the Harlem Globetrotters and preseason NFL games. For several years, Glickman pursued an NBA franchise for Portland, eventually winning an expansion franchise for the city in 1970. He had less than a week to pull together the funding of $3.8 million and was successful with investments from Herman Sarkowsky, Larry Weinberg and Robert Schmertz.

Glickman oversaw all business and basketball operations as the Portland Trail Blazer’s General Manager and President from 1970 until his retirement in 1987, winning an NBA Championship in 1977. Glickman was recognized as Oregon’s first Citizen of the Year in 1992 and was inducted into the Oregon Sports Hall of Fame in 1986.

Harris and Glickman will be honored with the John W. Bunn Lifetime Achievement Award during the 2019 Naismith Memorial Basketball Hall of Fame ceremonies, to be held at the “Hall of Fame Family Reunion Dinner” in September 2019.