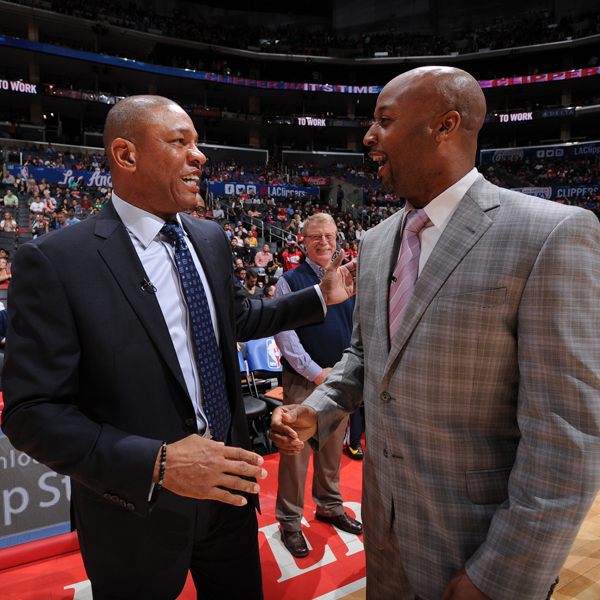 LOS ANGELES – Before Doc Rivers ever held the title of head coach, long before he coached the Celtics to a championship in 2008 and before he was named NBA Coach of the Year in 2000, the Clippers’ coach was an analyst.

So it only makes sense that as Steve Kerr makes the move from analyst to head coach of the Warriors, he absorbs all the knowledge he can from the head coach who made the transition as seamless as anyone.

Kerr said Rivers is great to talk to about the NBA, and considering his similar path from player to analyst to coach in the league, Rivers was particularly helpful to Kerr.

“I’ve always been a huge fan of Doc’s,” Kerr said. “He’s one of the best in the business, so for him to give me some council while I was going through the process, it meant a lot to me.”

Sometimes, the advice imparted by a veteran head coach can be trivial. Other times, it can make an impact on a major life decision.

Rivers believes in Kerr as a coach and wasn’t hesitant to lend his advice when Kerr had a decision to make this offseason. Kerr was one of the league’s hottest commodities in the head coaching market, and he eventually chose the Warriors over the Knicks.

“He’s a good guy,” Rivers said. “It’s more during the time where clearly he had two choices, and we talked a lot about that. Without saying what I told him, I thought he ended up in the right place.”

Kerr’s not the only one to embark on a new journey as an NBA head coach this year. The last four teams the Clippers have played in the preseason featured head coaches in their first or second years in Quin Snyder (Jazz), Brian Shaw (Nuggets), Kerr (Warriors) and Jeff Hornacek (Suns).

Shaw and Hornacek are entering their second year as the head coaches of their respective teams, while Snyder and Kerr are NBA head coaches for the first time this year. Rivers, who’s coached in the NBA since 1999 and has kept his winning percentage above .500 each of his past seven seasons, is someone those coaches admire.

“To be a young coach, particularly in the NBA, he’s one of the people that I think all of us look up to,” Snyder said. “Certainly for me, there’s a level of respect there that he’s as good as he is.”

Rivers’ Clippers played two games against Snyder’s Jazz this preseason, losing the first and taking the second. After that first loss, Rivers spoke to Snyder in a gesture the Jazz coach appreciated.

“I’ve had a lot of people that have impacted me,” Snyder said. “He’s one of them.”

That impact doesn’t have to always be verbal. Even when Rivers isn’t purposely imparting knowledge on the younger head coaches, many of them are still learning from the veteran coach.

“There’s an inbounds play they ran against us and I put it in the next day,” Snyder said. “There’s a tactical part of it, and there’s also just his presence and the way he handles players and handles people. I appreciate that.”

For beginning head coaches such as Kerr and Snyder, the smallest gestures from veteran head coaches can go a long way as they figure out how they want to run their teams.

Kerr’s still getting a feel for practice tempo and practice standards that he wants his players to understand. He realized in Las Vegas in July that drawing up plays on a whiteboard wasn’t something that came natural to him, so he used those weeks in the summer to get more comfortable with that.

Kerr will have plenty of time now to get acquainted with his new team as he makes the move from analyst to head coach. Rivers, who’s well aware of what it takes to make that move, joked that Kerr’s actually “got to work now for a living.”

“I invited him to golf with me on Sunday and he actually emailed me back, ‘Excuse me sir, I have a job now,’” Rivers said before playing the Warriors on Tuesday. “He was right. I didn’t know they played on Sunday. Too bad for him. It was fantastic.”